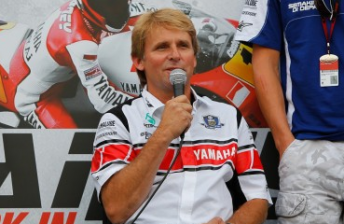 Three-time world motorcycle champion Wayne Rainey has made an emotional return to the Misano World Circuit – 18 years after his career-ending crash.

After securing three-consecutive titles between 1990-1992, Rainey led the 1993 championship until he fell off his Roberts Yamaha while leading at Misano on September 5.

His crash broke his spine, paralysing him from the chest down. It ended his riding career instantly and confined to a wheel chair.

For the first time since the accident, Rainey returned to the circuit for this weekend’s San Marino GP where he admitted that it was a difficult experience.

“It’s pretty crazy, my emotions are much higher than I thought they would be,” said Rainey.

“My first Grand Prix in Europe was in 1984 and was at this race track – I finished in third place – and this is where I finished my career.

“I can tell you that I never enjoyed a race track more than I did here. I’m just very happy to be back again and I want to thank Yamaha for bringing me back. It’s been 18 years since I’ve been here and I’ve got to thank the fans and a lot of my friends and my family.

“This is Yamaha’s 50th year of Grand Prix racing and just to have been a part of that for six years is very special.”

See below for footage of Rainey’s career-ending crash at Misano 18 years ago.