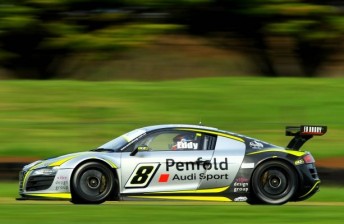 “We’ve been making adjustments to the car all weekend and it’s been getting better and better, but when we put the soft tyres on, the car just came alive,” said Eddy, who is yet to score a round win with the Audi R8 LMS that he debuted last year.

Peter Hackett’s Mercedes AMG SLS had held the top spot for most of the qualifying session but will start third, while the Angelo Lazaris/Barton Mawer Lotus Exige GT3 was a surprise fourth.

“It was one of those times where everything fell into place right from the start. Tyre temp came up quickly, we had a clean lap, the cars settings were perfect and as a result we’ll now start from fourth.”

Kevin Weeks’ Lamborghini and Ash Zamadi’s Mosler round out the six, ahead of Tony Quinn’s Aston Martin.

Quinn, who leads the 2011 championship after four rounds, will now co-drive with his father Tony for tomorrow’s races.

“It’s not what I wanted to do as today was the first time I have ever driven the Aston, but this gives me the best chance to keep my Championship lead alive,” said Klark Quinn.

Halfway through the qualifying session, rookie driver John Tupou had a massive accident while making his way onto the main straight.

The former Rugby Union great is having his first outing in the Australian GT Championship, before heading off to the New Zealand Rugby World Cup event as Team Manager for the Tongan Team.

Tupou’s Porsche 997 Cup Car left the circuit at more than 180km/h, before shooting across the circuit and crashing into the pit wall.

“That was certainly the scariest moment of my racing career so far,” said Tupou.

“I was coming on to the straight, and the car just kicked sideways, and I was a passenger from there.”

“I’m most disappointed that I probably won’t be able to get the car fixed for the next round of the Porsche 911 GT Cup Challenge which is next weekend at Sandown.”

In the GT Challenge class, John Modystach and Jonny Reid will start from pole position after a ding dong battle with fellow Challenge Class competitors Adrian and Damien Flack.

“Jonny did a great job today to post the time he did, and really, to have the car starting eighth outright and first in Challenge Class is a credit to him and the McLrea Racing Team.”

Teams will contest a pair of one hour races tomorrow, with fathers being offered free entry to the picturesque Victorian circuit to celebrate Fathers’ Day.