Ken Block is looking to step up his World Rally Championship program in 2012.

Block, in Australia for his Gymkhana World Tour at Calder Park tomorrow, as well the Rally Australia WRC event next weekend, wants to drop some of his other racing commitments to focus on a full season of World Rally.

“Hopefully next year, I’ll be able to step up to a full program,” Block told Speedcafe.com.

“Next weekend’s event is only my 12th WRC event – I haven’t even done a full season yet, so I’m looking forward to being able to do that next year.”

In the four rallies that Block has contested this year, he is yet to score any championship points, with a best result of 12th in Mexico. His best career result is a ninth place finish in Spain last year. 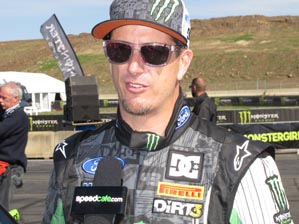 “The goal was to get started, build up speed and get competitive,” Block said.

“I’ve struggled a bit, but I’ve also been able to up my pace over time. I had a fifth fastest stage finish, which for an American like me with as little as experience as me is quick good.”

Block is looking forward to next weekend’s Rally Australia in Coffs Harbour, stating that the gravel surface will suit his style.

“I’m very happy to be back on gravel,” Block told Speedcafe.com.

“The last event we had was in Germany on the tarmac and I really struggled. That was only my sixth tarmac rally, so I’m still quite a rookie at that.

See below for Speedcafe.com’s exclusive chat with Ken Block at Calder today.