Supercheap Auto has been a supporter and sponsor of Australian motor sport for as long as the V8 Supercars championship has been around.

It is currently the naming sponsor of the annual Bathurst 1000 event and of car #39 at Paul Morris Motorsport; it is also involved in the Fujitsu Series as Jack Perkins’ team backer.

Much is said of Vodafone’s V8 sponsorship, Toll is often mentioned and there is much discussion around Bigpond and Monster, but Supercheap Auto tends to go under the radar. In truth the automotive giant is one of the biggest sponsors in the sport and its current involvement stems from an initiative introduced by former company Managing Director Bob Thorn.

Bob Thorn started at Supercheap Auto in 1993, initially as its Director for Retail Operations, and by 1997 he was its Managing Director, a role he held until he left the business in 2006.

“The research that we’d done on our customer’s profile pointed to V8s, so investing in the sport was definitely the way to go,” Bob Thorn told Speedcafe.com

“We wanted to grow our Australian presence, we were initially a Queensland based business and we needed something to lift the brand nationally.

“The name ‘Supercheap Auto’ was in some ways a stumbling block, it was not exciting, so we went to motorsport to help turn this around.

“We have been involved in V8s for a very long time and the impact that it has had on the business has been really strong.

“When I started at Supercheap Auto we had eight stores, now it employs thousands of people across Australia and New Zealand and turns over a billion dollars a year.” 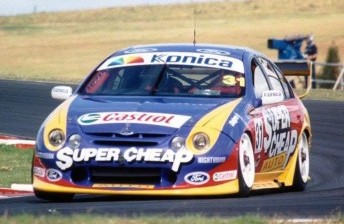 While Supercheap had been involved in V8s from the start, it made its first big step into the sport when it decided to take its first naming sponsorship at Steve Ellery Racing.

“I thought Steve was a really good driver and a good bloke, his parents Bruce and Lorraine were also very nice people,” said Thorn.

“We couldn’t cough up the big numbers to be with the big teams at that point, and going with the Ellery’s allowed us to have a presence and to gain exposure.

“It was a matter of being in the right place and at the right time for both of us, it was a good fit and we did lots of promotional work together.”

The best moment for Thorn and Supercheap Auto came when Ellery and Luke Youlden came third at Bathurst in 2003.

“Bathurst 2003 was the highlight without question,” said Thorn.

“We weren’t considered a threat, so to get on the podium was unbelievable.

“From a corporate perspective it said hey here’s this small team and a small growing business and here we were on the podium, how good is this.

“Personally I was so terribly proud of what Steve and Bruce (Ellery) had accomplished. I always rated Steve, I always thought that he had the talent and I thought he could have gone on further, he had the ability, it was a great time.”

After several years with the Ellerys the time came for Supercheap Auto to step up its involvement in the sport. Enter Paul Weel Racing and Greg Murphy.

“While supporting the Ellerys worked well for several years, we realised we needed to go to two cars,” said Thorn.

“The single car team was too tough, we knew we could lift our sponsorship money but needed the Ellerys to raise more money to make it work. This wasn’t possible so we needed to link in with a team that had other sponsorship, which is how the deal came together with Kees Weel.” It was around this same time that Supercheap Auto started talking with Murphy as it recognised that it needed something big to help them launch into New Zealand.

“I’d approached Greg, not so much for car sponsorship, but for a personal relationship because of his profile in New Zealand,” said Thorn.

“The average Kiwi really knows Greg Murphy. Working with him and PWR made a lot of sense, we were moving into the New Zealand market and it worked very effectively.

“It worked really well, we used him in television commercials and then in the Bathurst 1000 TVCs.

“It was worthwhile for the organisation and hopefully for Murph’s profile as well.”

Along with its driver and team sponsorships, Thorn believed Supercheap Auto came of age when it successfully took over the Bathurst 1000 naming rights in 2005.

“The naming rights at Bathurst said that Supercheap Auto had made it,” said Thorn.

“We had a team and we were a key industry sponsor. We were the leading player in the aftermarket accessories game in Australia and New Zealand, it was a special time.”

While Thorn played a big part in Supercheap Auto’s investment in domestic motorsport, he was also well known within the community – thanks to his role in the company’s ‘Steve Lender’ advertising campaign – and he was also known for his time behind the wheel.

Thorn, like many Australian males, always had an interest in motorsport but his business career always took first priority, it was this that prevented him from racing until he was almost 40.

“I knew about a guy named Rod Dawson who had a Gemini and I thought I’d give racing a go,” said Thorn.

“It was 1993, and Supercheap Auto was a very small business back then, running the Gemini was inexpensive, it was the cheapest form of motorsport.

“My first race was at Lakeside. It was terribly frightening – when you consider all the enthusiasm and emotions coupled with insufficient talent – but it was a lot of fun.” Thorn raced in several series including the ATCC Privateers Cup, where he finished eighth in 1999, he raced in the Konica Series (now known as the Fujitsu Series), he came fourth in his class in the 1997 GT-Production car championship and raced in the GT-P Nations Cup, all with backing from Supercheap Auto.

“It was the most amazing experience,” said Thorn.

“Like many, I’d watched the event for years on television but I’d never been to the track, so I had no appreciation for the height of the mountain.

“I went out in the practice session thinking ‘what the hell am I doing here’ but I thoroughly enjoyed the experience.”

His racing career highlight came in 1998 where he came fifth in his class at the Bathurst three-hour event.

“Rod Dawson and I ran the Supra in the GT-Production class,” said Thorn.

“We were in a street car racing against race cars. We nursed it home and we did identical times. We got through it; it was great achievement and a great buzz.

“My other ‘moment’ came at the Bathurst 1000 in 1999. I started the race; I was sitting there on the grid thinking ‘I don’t know what is louder, the engines, the crowd or my heartbeat’.

“It was an amazing experience, even if we didn’t finish the race.” While he regrets not giving more time to racing, Thorn admits that he is a business man not a racer, and that while he enjoyed racing his first priority was always to the running of Supercheap Auto. In the end it was his commitment to the business that saw him walk away from it in 2006.

“When you are running a public company you are working six or seven days a week, I never saw my young bloke and I thought that there had to be an alternative,” said Thorn.

“I thought enough was enough, we had floated the company in 2003/2004 and I thought there were other things in my life that I wanted to do, so I moved on.”

Since leaving the company Thorn has been involved in a small farming interest, he provides business advice to a few businesses and is the director of several companies.

“I’m not full time with one business, that’s where the change is,” said Thorn.

“I also still race my GT3 Cup car from time to time.”

A keen observer of the V8 Supercars championship, Thorn admits that he went through a period where he was concerned about the sport’s longevity.

“But I see it now and there seems to be some passion and drive there.

“There are also some young guys coming through that has sparked some excitement.

“I still worry about the two brand (manufacturer) situation, so I think it will be great when other brands are coming in.

“It’s great to see something (V8 Supercars) that started so basically, improve to what it is now.”

As a businessman though, he is concerned that those running V8s are focussing too much on the sport’s international expansion and not on the sponsor.

“Going off shore, I see a disconnect in some ways,” said Thorn. 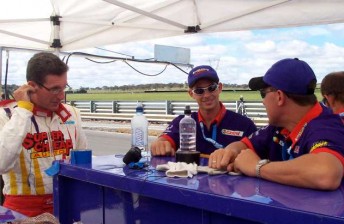 “It was one of the things I argued when I was involved in the category. Where are the considerations given to the sponsor and what benefit do they get for their involvement?

“It seems to be all around the category, the drivers and the team owners.

“I’m not convinced that they fully appreciate how important the sponsor is in the whole formula.

“The off shore stuff, how will that benefit the sponsors? I think that question is unanswered.

“I think the category should really think about the sponsors and what they get out of it.”