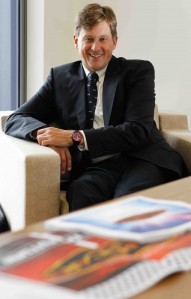 Martin Whitaker will no longer hold the role of Chief Executive Officer at V8 Supercars, taking on a new role in the company.

Whitaker, who joined the Championship as the CEO early last year, will take on the newly-created role of International Director.

Shane Howard will assume the role of acting CEO while the company conducts another global search for Whitaker’s replacement.

The change is just one of a number of senior management changes to support the Championship’s ongoing international expansion.

These changes follow the review of V8 Supercars’ operations and growth strategies conducted as part of the recent sale process.

Whitaker’s new role will make full use of his international motorsport relationships, with V8’s plans to stage up to six annual events outside of Australia/New Zealand by 2015.

Whitaker boasts a global network and stellar career including senior roles with Formula One Management (FOM), international motorsport’s governing body, the FIA, the Ford Motor Company and the Bahrain International Circuit, where he was CEO for seven years before joining V8 Supercars.

V8 Supercars also announced the appointment of Peter Trimble to the newly-created role of General Manager – Systems and Finance.

Trimble is a highly credentialed senior finance and systems executive with deep experience in driving organisational change. His most recent role was with ABC Learning which he joined to lead the turnaround and regeneration of that business. Before that he spent 20 years in senior finance and general management roles within the CSR group, both domestically and overseas.

V8 Supercars Chairman Tony Cochrane said the evolution of the business has forced the company to shuffle its management personel.

“The V8 Supercars business has evolved over the past 12 months, with a major new shareholder, different ownership structure and V8 Supercars embarking on an ambitious growth plan,” Cochrane said.

“Overseas expansion is a key plank in our strategy and the international motorsport community holds Martin Whitaker in the highest regard.

“Now that our sale process has concluded it is the ideal time for Martin to focus entirely on opening new doors for V8SA’s world-class TV and motorsport offering.

“We are also pleased to welcome Peter Trimble to the team to help enhance our internal operations and systems as we enter an exciting new growth phase.

“The board and management team look forward to working with Martin and Peter in their new roles.”

Whitaker said that his new role will allow him to focus on dealing with potential international partners.

“The management team and board of directors are united in their vision and outlook for the Championship and the importance of adding new overseas events to our calendar.

“I look forward to continuing to lead the progressive international expansion of V8 Supercars.”