Dick Johnson Racing’s Steve Johnson has had a massive scare after his wife Bree was stretchered off a mountain at Thredbo Ski Resort.

Bree fell and slid down the side of a large black run slope and into a hole before hitting her head on an exposed rock.

It was certainly not the way the Johnsons, who are sharing their mid-season break with young son Jett, wanted to end their fourth wedding anniversary which had been the topic of Johnson’s Facebook page for several days.

“It was all a bit of a worry, but thankfully she is OK,” said Dick Johnson, a five-time Australian Touring Car champion.

“She was enticed to do a black run which she did not want to do and that was the result. The thing was that she was not wearing a helmet,
but that has since changed! 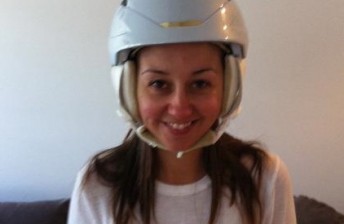 Bree Johnson was without her ski helmet at the time of her accident (IMAGE: Steve Johnson's Facebook profile page)

“They arrived at the medical centre which was full of people, as those places tend to be, and they did a few tests to ensure she was OK and had no major concussion.

“She was not split open, but she has a fair lump on her head.

“It is certainly not the type of phone call you want to receive.

“I don’t think she will be back out there without a helmet again.”

After receiving medical attention, Bree was ordered to rest, but was talking about a return to the slopes (Although much smaller ones) – this time with a helmet.

Johnson currently sits fifth in the championship in his Jim Beam Falcon and will have David Besnard as his co-driver at the L&H 500 at Phillip Island in two weeks time and then the Supercheap Auto Bathurst 1000 next month.

For more on Dick Johnson racing ahead of the V8 Supercars endurance races, see today’s episode of the IRWIN Tools Endurance Countdown with Grant Rowley, Jack Perkins and Chris Jewell.