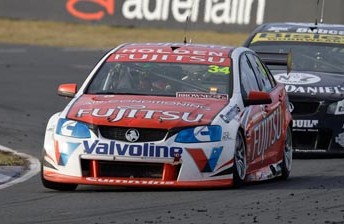 Caruso, who will have Marcus Marshall co-drive the new #34 Commodore, will get his first drive of the car in a test at Winton Motor Raceway next Monday (September 12) – the week leading into the Phillip Island endurance race.

The new car is the 13th V8 chassis to be produced by the long-standing Victorian V8 team.

Will it be ‘Unlucky 13,’ though? Caruso is looking on the bright side.

“The funny thing is, 13 is the lucky number in Italy,” Caruso said, relating the chassis number to his family origins.

“I’m not fussed by the number at all. I’ve started from grid 13 on a few occasions and it has never worked out bad for me.” 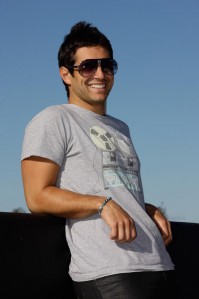 The new car will be Caruso’s first since 2009. He has driven the same car for the majority of the events since then, scoring a victory at Hidden Valley in 2009, plus a third place at Hamilton in 2010.

He currently sits 14th in the 2011 V8 Supercars Championship.

Caruso says the new car will be as close to identical to Holdsworth’s car that he debuted at the L&H 500 last year.

“The build of the new car is done, the team is now just installing the componentry,” Caruso explained.

“I did a seat fit yesterday, and we’ve got Marcus coming in soon to do an enduro seat fit.

“The new car has come together really well. There are some evolutions in there to make it more comfortable. I have the new FIA seat, which is a lot safer, so knowing that is a big bonus, especially at Bathurst where we’ve seen some pretty big accidents in the past.

“It’s basically built around Lee’s current car. My old car was a bit different, and that is what they wanted to work on. Since Lee has had his new car, it’s been hard to work together, but now we can utilise having two identical cars.”

After GRM’s test next Monday, all V8 Supercars teams head to Phillip Island for the three-day meeting.

Stay tuned to Speedcafe.com each morning for the latest edition of the IRWIN Tools Endurance Countdown. CLICK HERE to see the video featured so far …