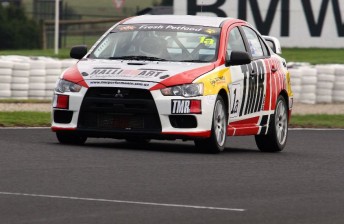 Kostera and Tulloch cleaned up earlier this year at Phillip Island

A 28-car field is set to take to Sandown Raceway for the inaugural Dial Before You Dig Australian Manufacturers’ Championship 500.

The event, run with the September 10-11 Shannons Nationals presented by Hi-Tec Oils meeting at the Melbourne venue, will see the production cars tackle a 250km race on both Saturday and Sunday.

While co-drivers are not mandatory, the majority of the field have nominated a second driver.

Petfoods magnate Tony Quinn will team up with son Klark Quinn in the VIP team’s Evo IX, while a second TMR Lancer, owned by Glyn Crimp, is also a strong podium chance.

Australian touring car legend John Bowe will once again drive a BMW 335i alongside car owner Peter O’Donnell in Class B, while the Mazda 3 MPS of Jake Camilleri and Scott Nicholas is likely to lead the way in Class C.

Toyota, Ford, Mini and Honda will all be represented in Class D, which will battle to stay ahead of the Class E entries which will not be required to make a compulsory pit stop in the races. The ‘baby class’ includes two entries from the Suzuki Swift one-make series.

Three former Mini Challenge vehicles will fight for their own ‘Mini Cup’ as part of the invitational Class I, which are expected to fight with the Class C entries on speed.

The Sandown event is the fourth and penultimate round of the 2011 Australian Manufacturers Championship. 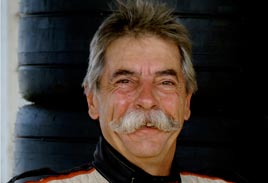