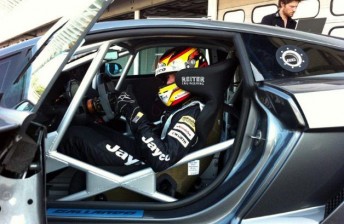 David Russell in the Gallardo

Russell flew to Germany following the Queensland Raceway V8 Supercars meeting, where the Queenslander took his Matthew White Motorsport Falcon to fourth for the round.

Russell teamed with Lago and Matt Kingsley for this year’s race, finishing fifth outright in a 997 GT3 Cup Car.

“What an incredible experience,” said Russell of his test day in Germany.

“Once the guys from Reiter Engineering knew that I was right on the pace in the car, they were happy to make a number of set up changes that I wanted and that resulted in the fastest lap of the day, on worn tyres.

“I was pretty happy with that, first time out at the challenging Hockenheim circuit and in this impressive GT3 car.

“I can’t wait until next year’s Bathurst 12 Hour to show what Roger and I can do in it.”

Russell will return to Australia to take part in the V8 Supercars Championship endurance events with Jack Daniel’s Racing, beginning with the L&H 500 at Phillip Island.

“After the tests that I have had with Jack Daniel’s Racing I can’t wait to get behind the wheel with Todd (Kelly) at the Island,” said Russell of the enduros.

“Kelly Racing has shown strong pace this year across all four of their cars and after finishing 6th last year in this race, my goal and that of the entire crew at Kelly Racing is to contribute towards a major result this year.”