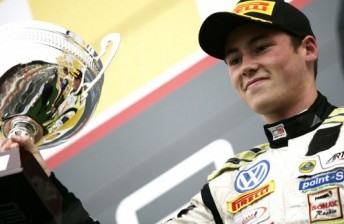 Stanaway on the podium

New Zealand’s Richie Stanaway has taken a race victory on debut in the GP3 Series at Spa-Francorchamps.

The former Australian Formula Ford racer and current German Formula 3 Championship leader stepped into the Lotus ART team for the weekend, with the deal having been struck just eight days before the meeting got underway.

A 10th place finish in Race 1 ensured pole for the inverted grid Race 2, which saw the 19-year-old battle with Nico Muller early before pulling away to win by four seconds from James Calado and Muller.

“Even though it was reverse grid it’s still nice to win a race on debut, especially after doing just six flying laps in the dry before the start of the race.

“(I) can’t explain how great it felt to be on the top step of the podium.”

It was a less fruitful day for Stanaway’s countryman Mitch Evans. The one-time GP3 Series leader added a DNF to the 11th place finish he scored in Race 1 thanks to an opening lap collision.

Evans now sits seventh in the standings heading into the final round at Monza in two weeks time.

Stanaway will also contest the Italian event with Lotus ART, having helped the squad wrap up the Teams’ Championship at Spa.