Clipsal 500 could change its qualifying day 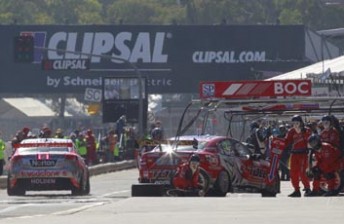 The Clipsal 500 could see a return to its old Friday qualifying schedule next year.

The South Australian Motorsport Board has submitted a request to V8 Supercars for qualifying and the top 10 shootout to be brought back to Friday afternoon.

Since the Clipsal 500 first started in 1999, qualifying was held on Friday until V8 Supercars made its qualifying and race schedule uniform across most events in 2009 – where a 20 minute qualifying session is run before the race on both Saturday and Sunday.

V8 Supercars CEO Martin Whitaker confirmed that a submission has been made and that the V8 Supercars Commission will look at the issue.

“Like all event organisers, they want to make sure they have a strong, entertaining event,” Whitaker told Speedcafe.com.

“There is a motivation from them to look at potential options, but that’s as far as it has gone at this point.

“V8s now put their request to the commission who will sit on that point and make a decision.”

The V8 Supercars Commission will meet before the next round of the championship at the L&H 500 Phillip Island.