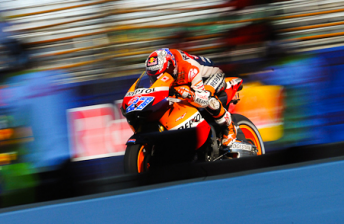 The factory Honda rider led by nearly five seconds at the end of the race, ahead of team-mate Dani Pedrosa and Yamaha’s home-town rider Ben Spies.

Pedrosa (Repsol Honda) took the early race lead, until team-mate Stoner overtook the Spaniard on lap seven and stretched his lead in front of the pack to remain unchallenged for the remainder of the race.

Stoner extends his Championship lead to 44 points ahead of reigning World Champion Jorge Lorenzo (Yamaha Factory Racing) with this win, his first-ever podium at the Indianapolis Motor Speedway. It is his seventh victory of 2011.

A bad start for Ben Spies (Yamaha Factory Racing) from second on the grid found the Texan down in ninth position. It only got worse when he and Andrea Dovizioso (Repsol Honda) touched heading into turn one, pushing Spies wide. The 25 year old methodically made his way back through the field and into third position by lap 16.

Lorenzo had seen second position in the early laps, but was overtaken by Stoner and then eventually Spies to finish in fourth position. Dovizioso tussled with Nicky Hayden (Ducati) early in the race for fifth, until Hayden fell back with tire problems, leaving the Italian to chase Lorenzo.

Álvaro Bautista (Rizla Suzuki) finished a lonely sixth after starting ninth on the grid. The Spaniard finished ahead of American Colin Edwards on his Monster Yamaha Tech 3 machine. Randy de Puniet (Pramac Racing) crossed the line in eighth, giving the French rider his best finish of the season.

Ninth spot went to Hiroshi Aoyama (San Carlo Honda Gresini), who crossed the line a second and a half ahead of Valentino Rossi (Ducati Team). Rossi’s 10th place was of note in that on lap eight the Italian fell back into 17th position with apparent tyre troubles. It appeared he would be entering the pits, but kept circulating and made his way back up to finish 10th in front of rookie Cal Crutchlow (Monster Yamaha Tech 3).

Marco Simoncelli (San Carlo Honda Gresini Team) had seen as high as third position in the race, until tyre trouble for the Italian saw him slowly drop back, finally finishing in 12th.

Toni Elías (LCR Honda) and Hayden completed the race finishers, with Elias ahead of the American. Hayden had pitted in earlier with troubles and rejoined the session to salvage some points, finishing 14th.

A disappointing end was had for Héctor Barberá (Mapfre Aspar), who crashed out of eighth place in the final corner.

Next Story Capirossi to hang up the helmet 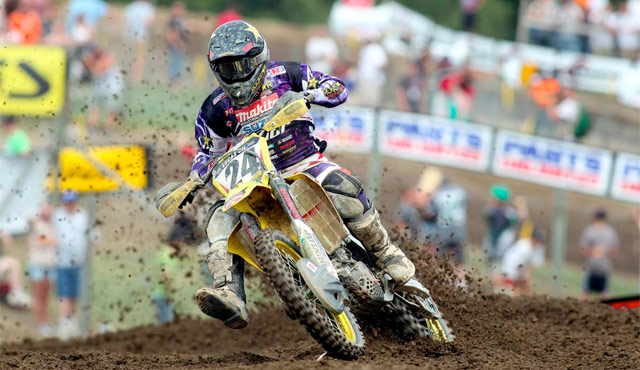