Vettel on pole in Belgium 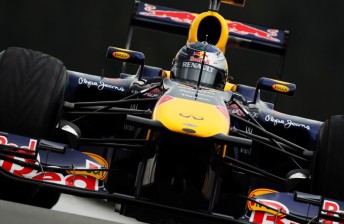 Sebastian Vettel on pole at Spa

In tricky weather, the World Champion grabbed his ninth pole of the season on his final lap ahead of McLaren’s Lewis Hamilton with Webber, who announced his 2012 contract extension with Red Bull at the start of the day (CLICK HERE for that story)  third.

McLaren was in the wars in Q2 with Hamilton having to barge his way by Pastor Maldonado at the final corner. The Williams driver than deliberately side-swiped the McLaren after La Source with race officials handing the Venezuelan a 5-spot grid penalty for the incident. Q2 also proved a shocker for Jenson Button who was told to come to the pits late in the session by McLaren believing he had done enough to make it into Q3. Despite Button questioning the team while still on the circuit, they told the British driver to pit and others went quicker; he will start 13th.

A disappointing qualifying for Paul Di Resta with the Force India driver failing to make it through Q1 and will start 19th. Teammate Adrian Sutil crashed midway through Q2 at Raidillion after Eau Rouge which brought out the red flag to clear debris from the accident.

Not a great qualifying run for Michael Schumacher, who this weekend is celebrating his 20th anniversary of his Grand Prix debut, losing a wheel and crashing in the opening minutes of the first session. The German legend will start last in the Grand Prix alongside Perth’s Daniel Ricciardo.

Jerome d’Ambrosio, Vitantonio Liuzzi, Ricciardo and Schumacher all set times outside the 107% mark. However, these times were set in the wet Q1 session and all cars are expected to be cleared by race stewards to start the race. 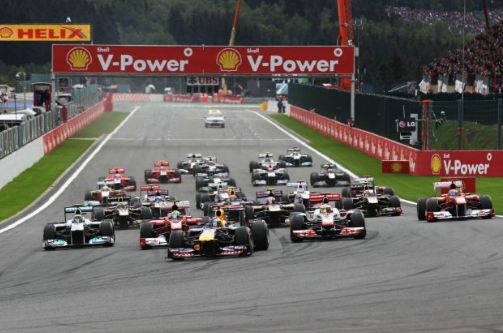