Home » Features » Where Are they Now » Terry Fullerton 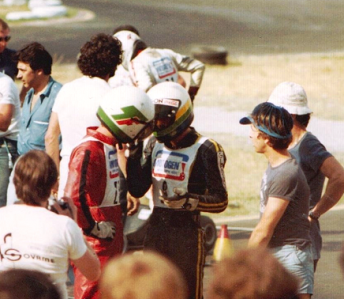 Terry Fullerton (left in helmet) talks to Ayrton Senna prior to the main final at Jesolo, near Venice, Italy in 1979

When Ayrton Senna was asked which driver he got the most satisfaction racing against, most expected him to say Alain Prost, Nigel Mansell or a well known Formula One driver, but this was his response:

“I came to Europe for the first time, to compete outside of Brazil … as a team mate to Fullerton, Terry Fullerton. He was very experienced and I enjoyed very much driving with him because he was fast, he was consistent. He was for me a very complete driver. And it was pure driving, pure racing … I have that as a very good memory.” Ayrton Senna.

Within motor sport circles most know about this view, but the rest or the world is fast learning about this thanks to the movie/documentary ‘Senna’ which Speedcafe.com launched on the Gold Coast recently, and is in cinemas nationally now.

Senna was of course talking about Terry Fullerton, the former English Karting World Champion and future driver trainer to some of the world’s best known racing identities.

In addition, he won four European titles, three Hong Kong GPs, four Champions Cups, two Philippine Open Internationals; he was the North American champion and of course proved to be the best in the world when he won the CIK FIA world title in 1973. 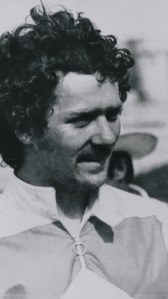 Fullerton started his karting career in the 1960’s initially with an eye on Formula One and motorbikes, but the death of his brother Alec in a motorcycle race saw him change his direction.

“I had a brother that was killed racing motorbikes, so it was a family decision to give go-karting a go,” Terry Fullerton explained to Speedcafe.com

“When I was young, when I was 11 or 12 years old, it was all about motorbikes or karts. It was really all you could compete in in those days and racing karts was something that I was interested in.

“I was very keen to compete in something and karting was the option, so I decided to go karting.”

By 1966, as a 13 year old, Fullerton had won the Junior British title, then re-wrote the record books when he went on to take two more, all consecutively.

Fullerton put his monumental success down to a bit of natural ability and the desire to not only win, but get the most out of himself.

“I think I must have had some natural talent, but I also worked very hard at it,” said Fullerton.

“I was pretty determined; it was something that I just kept working on. I enjoyed the challenge and I tried to be as professional as I could.

“I also loved trying new things and I was always true to myself. I was pretty determined, I loved doing it and I loved racing.

“When I was young I loved it because it was so much fun, so I think that this helped as well.

“I did have a 10/10ths approach; I put everything into my racing and wanted to win.”

Fullerton was renowned for the way that he approached his racing. Rather than go out and top the time sheets each session, which was Senna’s aim, he focussed on getting the go-kart perfect before qualifying. He closely looked at the engine, the chassis and pedantically tested his tyres.

“When you first start the track is very green, so it’s silly to put everything into that first session, get used to the track and the conditions first.

“As you get deeper into the weekend, and as you approach qualifying, it’s the right time to test chassis and tyres, so it was a logical progression.

“Once you sorted out the best engine you put that to one side and looked at other ways in which to improve the go-kart so that you had the best equipment combination.” 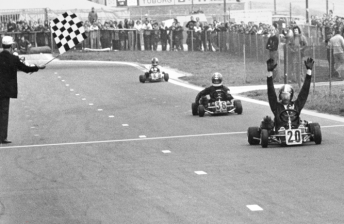 In 1973, Fullerton again made history when he became the first Englishman to win the CIK FIA World Championship, when he beat then four times champion, Francois Goldstein.

“Senna was also excellent thanks to his natural ability and determination, but he didn’t stay in karts for a long time so you can’t really judge him on results.

“Finally there was Mike Wilson, he won six world championships, he was a quality racer.

By 1978 Fullerton had won countless championship titles all over the world, he was a factory driver for DAP, one of the biggest teams in Karting, and was joined by unknown Brazilian Ayrton Senna, a team mate that he would race alongside through to 1980.

“Well Senna and I were team mates for three years,” said Fullerton. 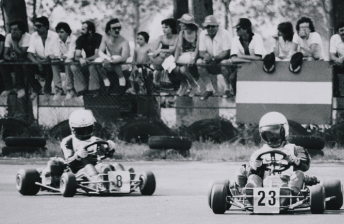 “He was very fast right from the word go, he was very obsessed, very determined and very focussed.

“He was a nice kid as well, but you never really saw that side of him much because he was so obsessed about what he was doing.

“He kept me on my toes, it was only my experience and the way that I used to test that set us apart.

“Winning the world championship was my career highlight, but managing to stay ahead of Senna for three years, that was quite an achievement.”

By 1984 Fullerton had decided to retire from racing to move on to the next phase of his career.

“I never wanted to race cars, it was not something that I ever considered,” said Fullerton.

“Apart from that I was 32 when I retired, that wasn’t the time to start looking at other racing opportunities.

“There were also some political things happening in karting at the time that helped with my decision, so I think I stopped at the right time.”

After retiring, Fullerton started his own business coaching and training the next generations of drivers.

“I teach young drivers everything that I know and try to turn them into the best drivers that they can be,” said Fullerton.

“I teach them the techniques of driving but also focus on the mental preparation so that they can become a well rounded driver.

“I think a good karter has natural born ability but a great go-karter has to have the ability and the obsession and the determination, and really love what he is doing.

“If you have the combination of those four then you can excel.

“There are plenty of fast karters around that don’t have the determination, they treat it like a hobby, the good guys aren’t like that.”

Along with speed, there are a number of personality traits that Fullerton is looking for when watching a young karter race.

“They need to be fast and then you are looking for a certain intelligence, you need to be sharp in the mind department.

“They need to have a capacity to learn and an ability to self criticise. They also need to be good learners and want to learn. They need to show these traits.” 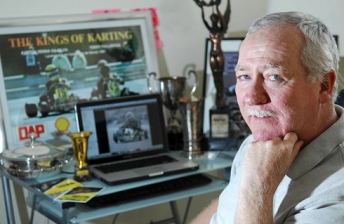 Fullerton, with some of his trophies, still coaches. One of his recent students in Force India driver Paul di Resta

As one of the most successful driver trainers in Great Britain, Fullerton has instructed some of the biggest names in the sport.

“I have had five of my past students drive in Formula One in recent years,” said Fullerton.

“The latest is Paul di Resta who drives for Force India, he’s the hot property in Formula One right now.

“At this moment six of my drivers are racing in IndyCars over in America, that’s almost 50% of the grid.”

When Fullerton looks back at his career he is proud of his accomplishments and of the drivers that he has helped along the way.

“I am very proud to have won the go-Kart world championship,” said Fullerton.

“I am also proud to see my drivers doing well on the international stage, guys like Dan Wheldon.

“The three guys that really stand out for me are Allan McNish, Anthony Davidson and Ralph Firman. They were all great students and are very good drivers.” 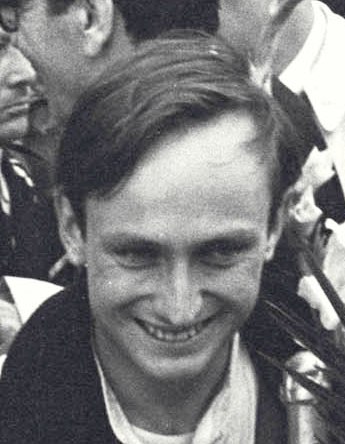