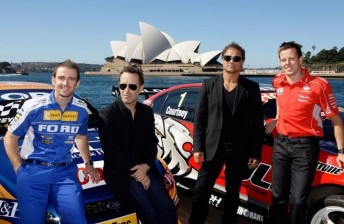 Four great Australian rock acts will take to the stage on the Saturday night of the Sydney Telstra 500 this December.

After a 13 year split, Hunters & Collectors is reforming for a one-off and once only concert, supported by ‘The Voice’ John Farnham, Noiseworks and James Reyne.

The card is reminiscent of the inaugural Sydney Telstra 500 in 2009 when iconic Aussie rockers Cold Chisel came back for what was then a one-off performance in front of a packed ANZ Stadium.

“There is nothing more Australian than V8 Supercars and these incredible home-grown artists and bands that have been the constant of Aussie rock for decades,” V8 Supercars Chairman Tony Cochrane said at today’s announcement in Sydney.

“From the very first year the Sydney Telstra 500 has been an unbelievable success, with more than 350,000 people attending the first two events and ensuring New South Wales has one of the biggest annual sporting events in the country.

“This lineup and our final Championship races of the 2011 season is an incredible mix for Sydney and the thousands of visitors that will travel from interstate and overseas to watch the weekend unfold. We are proud to deliver this event for the state and our fans.”

Tickets go on sale at 9am tomorrow for the Sydney Telstra 500, the V8 Supercars Championship Series grand final that takes place this year on December 2-4 at Sydney Olympic Park.

See below for the video commercial for the event.

Here is the launch activities