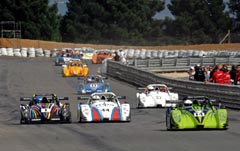 Radical Australia has confirmed that this year and next year’s Radical Australia Cup champion will receive an entry into the prestigious Radical European Masters at the renowned Nurburgring circuit in Germany.

Last month, Edward Singleton wrapped up the 2011 crown, scoring himself a drive in the 2012 Masters event.

The prize offers the series-winning driver flights, accommodation and a drive in the featured Masters round.
Featuring drivers from around the globe, the series attracts grids of 60-plus cars at each round.

The Radical Australia Cup features as the pinnacle of a multi-tiered structure involving corporate drive days and experiences, state level racing up to the full national series.

2011 winner Edward Singleton said the prize was a key factor in attracting him and his team to the Radical Australia Cup this year.

“It is one of the biggest prizes in any major category in Australian Motorsport,” he said.

“Certainly it was one of the reasons we made sure we completed the full season, committed to every round and ultimately were fortunate enough to win the championship. It has to be the best prize on offer in the sport and it’s a big drawcard.

“You can go and buy a drive overseas but this is so different and it’s not often a series can offer something of this value as a trophy for competitors.”

Radical Australia’s Greg Smith said the company was looking forward to awarding the prize again in 2012.
“The prize reflects Radical’s status as an international category and allows us to reward our local competitors for their performance and commitment,” Smith explained.

“It’s great we can send our champion over to race against the best Radical competitors in the world and show what the Australian’s are capable of. It reflects very well on our series internationally and also shows how competitive the Radical Australia Cup is ‘down under’.” Next Story Another name change for Carrera Cup