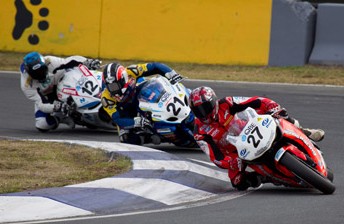 Team Honda’s Jamie Stauffer defied the disappointment of a DNF yesterday to win the second race of Round 6 of the QBE Australian Superbike Championship at Queensland Raceway today.

Stauffer led the 14-lap race from pole, treading carefully on a low-grip circuit as he fended off a race-long challenge from Team Suzuki’s Josh Waters.

Stauffer and Waters engaged in a battle of the late brakers, with Waters attempting but unable to convert a number of moves for position at the end of the circuit’s 280kmh back straight.

After a dramatic crash yesterday, Stauffer took the chequered flag by 2.2s and his third race victory from four starts at Ipswich.

“Yesterday was a disappointment,” he said.

“It’s one of those things that happen in racing and we could have won that quite easily. We made up for it today by going out there and getting the win.

“The conditions weren’t easy today, the track was a bit slippery but everyone had to race in the same conditions, I’m just glad we brought it home for the win.”

“To get the overall win here in front of an awesome crowd is good,” he said.

“The overall win is a bit of a surprise, it’s a lucky win with Jamie and some of the other boys making mistakes. It puts us back in contention for second in the championship and that’s all we can achieve after the year we’ve had.

“Full credit to the guys at Team Honda Racing, they’ve given me the confidence to get up the front and battle with those guys. We move on to some tracks that I’m a bit stronger at, Tassie and Phillip Island, so I should be able to get up there and end up second in the championship overall.”

Allerton’s fourth place was his first non-podium finish for the season – an incredible statistic which sees him sitting comfortably atop the standings as the ASBK looks ahead to its penultimate round at Symmons Plains in November.

The BMW rider’s points lead extended to 67 today as the battle for positions two through to six tightened considerably.

By virtue of his pole position point, race win and DNF, Jamie Stauffer remains in second but is joined by Attard, with both riders sitting on 196 points.