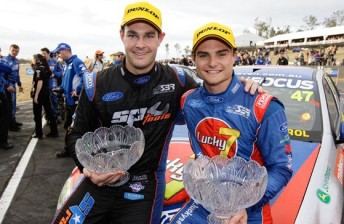 van Gisbergen and Slade after Race 18

By finishing second and third in today’s Race 18, Tim Slade and Shane van Gisbergen ensured the local team had two drivers on the podium for the first time since 2005.

The result completed a career-best event for Slade, who finished second and third in the two Saturday races respectively.

Earlier in the weekend, the team’s Fujitsu Series driver Scott McLaughlin took his first career race win and round podium.

“We’re running four cars altogether with the Fujitsu car, and with Scott and Alex (Davison) we’ve had everyone on the podium this year, so we’re pleased about that,” said Stone.

“We’ve just got to keep our heads down. We actually want to be getting one of these guys sitting where Lowndesy is sitting (Craig Lowndes won all three races). That’s our target and we’re just going to focus on that.

“If we keep doing the simple things right I’m sure we can get in there and put more pressure on them.”

Asked about the team’s sponsorship negotiations with Ford in the post-race press conference, Stone said the issue will be reviewed in the coming days.

“There’s lots of stuff going on everywhere, so for us having two guys on the podium is what it’s all about this weekend,” said Stone.

“Next week we’ll get back into that, have a look and see what’s going down.”

Van Gisbergen remains third in the championship standings after 18 races, with Davison ninth and Slade 13th.

McLaughlin sits third in the Fujitsu Series, 166 points down on leader Andrew Thompson. Next Story Tyre allocations for PI and Bathurst altered 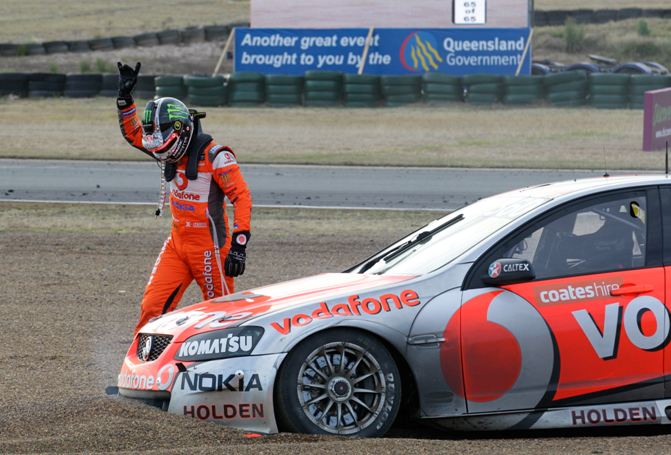