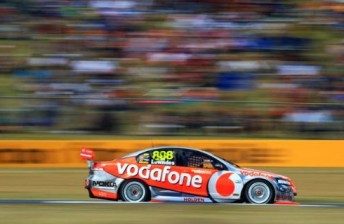 Craig Lowndes is on track to clean sweep the Coates Hire Ipswich 300 event after taking pole position for Race 18.

The TeamVodafone driver, who topped Friday practice, yesterday’s qualifying session and both races, will start alongside team-mate Jamie Whincup.

Unlike yesterday, Lowndes did not set the immediate benchmark in the 20 minute session, but was one of the first cars on track for his second run, putting himself at the top of the table with a 1:09.73s effort.

The five-time Bathurst winner improved during his third and final run, clocking 1:09.57s with less than two minutes remaining.

Jason Bright was one of the first to set off for his last effort and ended up fourth, while Shane van Gisbergen had set the early pace but could do no better than fifth.

It was another tough session for Ford and Holden’s factory entries, with Garth Tander 19th, Mark Winterbottom 20th and James Courtney 22nd.

The entire field was separated by less than one second.