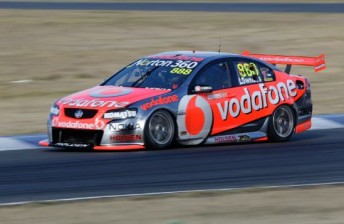 Craig Lowndes has held off a determined Tim Slade to complete a fairytale weekend at the Coates Hire Ipswich 300.

Lowndes added the Race 18 victory to his two wins from yesterday, and also scored both pole positions.

Despite the 65 lap race running without a Safety Car, Lowndes and Slade were separated by less than two seconds for the entire duration.

Van Gisbergen was over 30 seconds behind his team-mate Slade by the chequered flag, while Moffat made it past fellow career-best finisher Reynolds for fourth with just five laps remaining.

Whincup scored 10th position despite pulling into the pitlane on the warm-up lap for his team to remove the cover from his engine’s injector trumpets that had been erroneously left on for the race.

The championship leader also received a drive-through penalty for speeding in pitlane – losing him more than a minute to Lowndes in total.

A collision with Rick Kelly on the final lap also added excitement to Whincup’s day – the resulting damage seeing Whincup beach his Commodore in the Turn 1 sandtrap after the chequered flag. Kelly ended the race 17th due to the Turn 5 incident.

Steve Owen and Jason Bright were also hard luck stories, with Owen set for a top 10 and Bright a potential podium prior to mechanical issues arising as the cars made their second pitstops.

Russell Ingall and James Courtney were 11th and 12th respectively despite clashing in the closing stages. The contact saw Courtney spin across the middle of Turn 5, costing both drivers position to Kelly and Whincup.

Whincup now leads the championship standings by 98 points over Lowndes, while van Gisbergen, Kelly and Johnson round out the top five.

See below for the Race 18 result 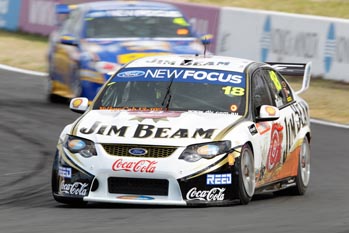 Next Story James Moffat: Mistakes cost me a podium