Ambrose: No hard feelings with Villeneuve 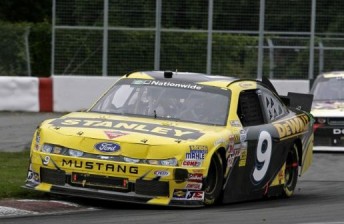 Marcos Ambrose has shrugged off the clash with former Formula One World Champion Jacques Villeneuve that nearly took the Australian out of the NASCAR Nationwide Series race at Montreal.

The incident occurred during a mid-race restart, with Villenueve going off at Turn 1 before spinning Ambrose as he rejoined at Turn 2.

The pair then came into contact again later in the lap, with Ambrose returning serve on the Canadian.

Ambrose recovered to win the race, while pole-sitter and local hero Villeneuve was forced to retire.

“It’s a shame it happened because Jacques and myself had the two best cars out there and it’s quite unnecessary to wipe out both cars,” said Ambrose of the collision.

“We sailed off into Turn 1 – we both wanted the lead. I was on the inside for the left-hander, held my line and he ran out of track, went to the grass and I guess he couldn’t slow down.

“So unlucky for him, it ruined his day, but lucky for us it didn’t ruin ours.

“There’s no hard feelings there, it’s just tough racing. We know that Jacques doesn’t leave much on the table, he’s a 100 percent saw of guy, and I knew what I’d gotten myself in for when I turned into Turn 1 there and it’s just a shame it happened.

“But it doesn’t matter, we came back through the field – with 25 laps to go I think we were like 28th and there was a lot of work to be done.

“From there on I just put my head down, stayed calm and put down some good laps and made some aggressive passes and made up for that lost ground.”