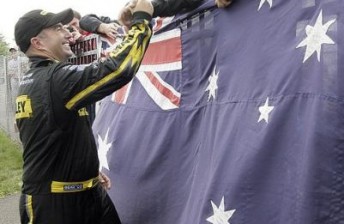 This weekend is a busy one for Marcos Ambrose, racing in the NASCAR Sprint Cup Series at Michigan and the NASCAR Nationwide Series in Montreal.

The former V8 Supercars Champion took some time out from his busy schedule to reflect on his first Cup Series victory at Watkins Glen last weekend.

QUESTION: Tell us what this week has been like for you.

MARCOS AMBROSE: It has been a huge week. In Australia and where I am from, Tasmania, sent out a press release congratulating me on the win, so that was cool to see. It must have been a slow news week in Australia on the sports side because it got a big run down there! There were a lot of great comments and good media.

The biggest thing is the reach out from fellow drivers and people inside NASCAR that texted me and told me how happy they were that I won. It meant a lot to be respected by my peers. That is the biggest thing I took out of it, the outpouring of respect of the fellow drivers who I look up to. It means a lot. It was good to get the King in victory lane and get the win off my back. To get the first one is pretty tough. I am looking forward to getting a few more.

Q: What were they doing in Launceston, Tasmania? We have heard it was a pretty big party.

AMBROSE: I know my friends were drinking a lot of beer at very inappropriate times! At 2:00 on a Tuesday morning they were all drunk as skunks and texting me like crazy. My mum, she was really proud and my Dad was down there too and jet lagged because they stayed up all Sunday night to watch the race and then they had to do it on Monday because of the rain. I think they were sleep deprived and merry on the Australian lager.

It was a great news story and got a lot of press down there. I did a lot of NASCAR 101 during the week with the media outlets that don’t normally follow NASCAR and follow the sport. It was fun to teach the casual Australian race fan about what NASCAR is.

Q: How does this win rank among some of your V8 Supercar Championships?

ANSWER: A couple of wins really stand out. I won a European race against some really good talented drivers and that sticks out as one big race in my memory that was big to win. I guess this would be the biggest win of my career no doubt. Winning a championship down home was special, slightly different than winning a race, but this is the highlight of my career no doubt about it.

Q: Did you hear from anyone after your win that surprised you? 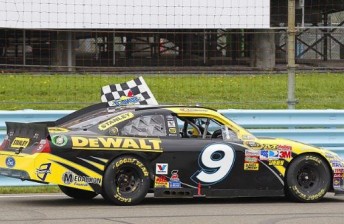 AMBROSE: It was great to see Robin Pemberton and Mike Helton come into victory lane. They shook my hand and that was pretty cool. I look up at those guys. They run the sport and they are about as powerful as men can be in this game. For them to acknowledge that I exist and to congratulate me was really special.

Matt Kenseth, who has been great to me this year. Smoke as well. When I first came into the Cup Series, Smoke let me know what I was doing wrong quite often. He would come into my window during practice or after races and was quite vocal about what I needed to do to be a more complete driver. On the back side of that when I got my win, he was a guy saying, ‘You’ve got this, don’t mess it up, do what you do’. That was pretty awesome.

Q: Do you have any idea how many times you have heard, ‘ok, when are you going to win on an oval?’

AMBROSE: Yeah, at least they stopped talking about Sonoma, so I can put that away and we can start working on that oval thing. Hopefully this week we can fix that too. We have been close. I have run great at some tracks I didn’t expect to like Bristol, Dover, Charlotte, Texas and Vegas. We are going back for a second time with this team now to tracks that we have a database on and some history together. I think that will make a big difference to us.

Hopefully we can stop from talking about that. I need to win on ovals; I want to win on ovals. That would finish the story for me. If I could win an oval race, it would be the crowning moment in my cruise through NASCAR. It is the one thing that is missing from what I can tell.

Q: There were some Aussie outside the media centre on Monday with a huge flag. Did you get to meet them?

AMBROSE: I did yeah. I think some of them were New Zealanders that were just on the gravy train, trying to pretend they were Australian (laughs). I met them after I got to the motor home. They were waiting for me and that was awesome to see. Who would have thought that at Watkins Glen there would be Australian race fans cheering me on? It’s pretty cool to watch it all happen and I think from the feedback I get from Twitter and Facebook and all the website stuff that the drivers and I do, I am getting a lot of feedback from people saying they came to this race or that race and I can see it more and more now. I see them hanging off the fence during the driver parade. A lot of Australians are tuning into NASCAR and starting to appreciate the sport.

Q: Can you talk about what you had to give up to come and run in the Cup Series?

AMBROSE: It is like anybody who has a shakeup in their life. Sometimes you have to start again. I don’t regret any decisions I’ve made. I am pleased it has worked out. Even if it hadn’t worked out, at least I would have been on the front porch in the rocking chair thinking that at least I had a go. I don’t want to be a guy who thinks he can, I want to be a guy who knows he can’t. I keep trying and keep trying new stuff.

Don’t get me wrong, I have had a good life and I am having a good life. I am one of the lucky ones who has made a career of something he loves.

Q: What type of emotional lift or weight off of you was last week’s win?

AMBROSE: Huge. The one regret I have is that I wasn’t able to get Toyota and JTG Daugherty to victory lane on the road course. We put a lot of effort into it and I feel I missed an opportunity at Sonoma. It is one of those regrets I will carry with me the whole way, to the end of my career. I had chances last year and didn’t make the most of them and didn’t get to help those who helped me make it to the Cup series.

What can you do? You can’t go backwards and let that hold you back. You have to keep moving forward and I shook it up last year again with another high risk decision. JTG and Toyota and everybody, I had a contract to run through the end of this year and I felt like I was stale and needed to make a change, otherwise I wasn’t going to get the most out of myself.

I jumped into a mess over there at RPM and realized it was probably higher risk than I imagined in the first place, but it worked out. Here we are today celebrating a win. It is great it did work out, but there were a lot of weeks there that I thought I made a really bad decision. Next Story Kelly stars with pole and ninth in Montreal 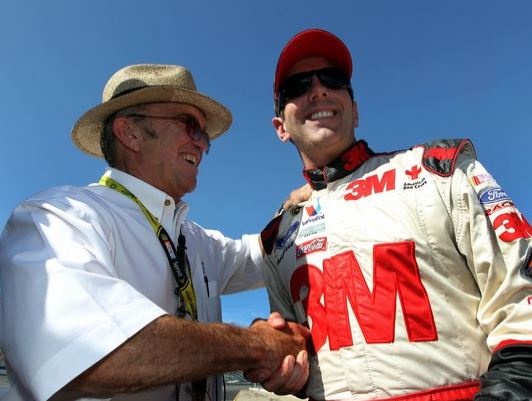