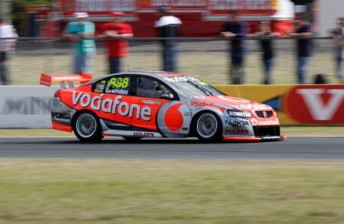 Craig Lowndes has taken pole position for Race 16 of the 2011 V8 Supercars Championship at Queensland Raceway.

Lowndes’s 1:09.80s pole time was set on the TeamVodafone driver’s first run of hot laps, proving unbeatable for the remainder of the session.

Tim Slade was the only driver among the leading pack to improve in the  closing stages, moving from third to second, just 0.03s off pole.

Rick Kelly will start third, ahead of Jamie Whincup and an outstanding Karl Reindler.

Jonathon Webb was 11th in his Mother Energy Drinks Ford, despite spinning at Turn 3 early in the session.

It was a shocking 20 minutes for the Toll Holden Racing Team. Garth Tander and James Courtney will line-up 20th and 21st respectively, while Walkinshaw Racing’s third car, driven by Fabian Coulthard, was 23rd. Next Story VIDEO: QR's What about the fans?!