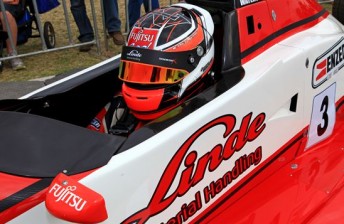 “I’m really happy with how practice went today, we managed to improve the car across the two sessions and we definitely saw a lot of improvements, which will help in qualifying and the race tomorrow,” said Waters.

“It looks simple on paper with only six corners, but the bumps really make Queensland Raceway a big challenge and it’s difficult to get a clean lap. I think we’ll change a few things overnight to try and find some more time, but things are looking good at this early stage.”

Foster had started the day slowly, posting only the ninth fastest time in the opening session before improving strongly in the afternoon.

“We really struggled this morning, but the changes we made between practice one and two really made some big gains in terms of time,” said Foster.

“We focused on getting a good set up for qualifying tomorrow, so hopefully that will pay off.”

Queensland local Jordan Lloyd was third fastest ahead of Matt Brabham (who is making his first appearance in the championship since winning at Winton in May), Jack Le Brocq, Shae Davies, Andre Borrel, Caleb Rayner and Tom Williamson.

The Superbikes saw one practice and one qualifying session today, with Team Honda Motologic rider Jamie Stauffer emerging fastest in the latter session.

A second 20 minute qualifying session will be held tomorrow morning at 8:00am, before the one-at-a-time Superpole session at 10:20am.

Meanwhile in the Aussie Racing Cars, Dave Sera set the fastest time of the day on his opening tour in Practice 1.

The Monster Energy backed karting champion is having his second run in the class this weekend, and went on to be 10th quickest in the afternoon session, which was topped by Paul Kemal (Independent Motor Auctions Falcon).

The Aussie Racing Cars will also return to the track tomorrow for qualifying (11:25am) and Race 1 (2:25pm). 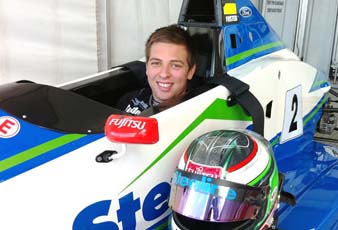