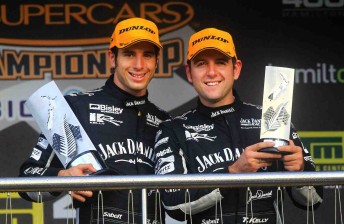 Rick and Todd Kelly on the Hamilton podium this year

Kelly Racing has announced a restructure of its senior management with the aim of improving the team’s performance on and off the race track.

Team co-owners Todd and Rick Kelly and Chairman John Crennan have conducted an extensive review of the business over recent months, with several key decisions made to improve the balance associated with Todd and Rick’s multiple functions within the race team.

Todd Kelly has reaffirmed his commitment to driving in the V8 Supercars Championship until the end of the 2013 season at the very least.

As a result, Todd Kelly will take several steps back from his day-to-day business duties as Racing Director of Kelly Racing to focus more on his role as driver of the team’s #7 Jack Daniel’s Commodore.

Crennan will assume a much broader management role in all aspects of the team and takes on the Chief Executive position effective immediately. 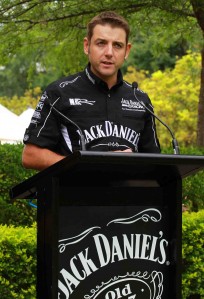 Crennan joined Kelly Racing as its inaugural Chairman of the Management Team in July last year and was previously the founding Managing Director of both Holden Special Vehicles and Holden Racing Team for over two decades.

The review and subsequent restructure also identified that Rick Kelly’s position as Commercial Director has not been the ideal situation for him to concentrate on his role as driver of the team’s #15 Jack Daniel’s Commodore.

Nick Ryan, formerly Commercial Manager, is promoted to General Manager – Marketing and Sponsorship with a broader range of responsibilities effective immediately, to allow Rick Kelly to concentrate more on his racing, where he currently sits fourth in the 2011 V8 Supercars Championship standings.

One role that Todd Kelly will retain is his position as Alternate Member of the newly established V8 Supercars Commission, which focuses on racing rules, regulations and formats.

Todd Kelly says that stepping back from his hands on role within the team will help him focus on his racing.

“Given we are two and half years into the formation of Kelly Racing and the endless 24/7 job we have put in to get the team to this point, it was time to take a step back and ask myself the question ‘have I got the right balance?’,” said Todd Kelly.

“Within this review I stated my clear preference was to get much more focus back onto driving.

“I am over the moon that we all agreed on a range of structural changes that will allow me to organise my life primarily around being a full-time driver.”

Rick Kelly, the 2006 V8 champion, says that the restructure is an example of how the Kelly Racing operation is putting results above all else.

“As a young team we are continually looking at ways to improve the performance and structure of our business,” said Rick Kelly.

“This review and restructure is another example of how we are determined to constantly look inwards to analyse Kelly Racing as a whole and put in place systems that improve what we do.”

New CEO John Crennan is confident that the new structure will fast track the team towards being the next ‘super power’ within the sport.

“I continue to have a strongly held belief that Todd and Rick are the future of this sport and their team will emerge as the next ‘super power’ in V8 Supercars, such are their capabilities and commitment to all facets of the business,” Crennan said.

“A tour of Kelly Racing will demonstrate how their facilities alone here at Braeside are world class.

“We have prepared a strong business plan for the next three years and these structural changes are just stage one of this plan.”

“If these staff moves, and others that we will introduce, lighten the ownership and management load for Todd and Rick by even 33 percent, then this restructure will have been successful.”