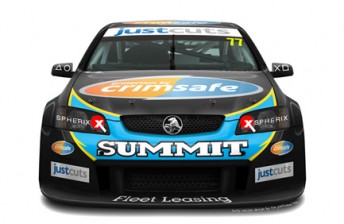 Grant Denyer has unveiled the look of the car that he will drive in his return to the Fujitsu V8 Supercars Series at Queensland Raceway this weekend.

As reported previously by Speedcafe.com, Denyer will have his first competitive drive of a Holden V8 Supercar in the Kelly Racing’s return to the Fujitsu V8 Series.

It will be Denyer’s 31st Fujitsu V8 Series round start, with four previous race wins in the category to his name.

The entry will be overseen by Dean Orr, who worked closely with Denyer in his time as Team Manager at Dick Johnson Racing.

The side view of Denyer's #77 Commodore

Denyer’s drive at Queensland Raceway is in preparation for his return to the Supercheap Auto Bathurst 1000 this October 6-9, where he will pilot a fifth Wild Card entry for Kelly Racing under the banner of ‘Shannons Mars Racing’. Denyer’s co-driver at Bathurst will be the winning contestant of the Shannons Supercar Showdown reality TV series.

“I am really looking forward to Queensland Raceway, as we are really using this as a test before Bathurst, just to get some race miles after being out of a race car since December 2009,” said Denyer.

“Long time supporters Summit Fleet Leasing and Just Cuts have jumped on board for the Queensland round, as well as Steve Brabeck from Crimsafe and Playstation, who supported the team when we finished fourth in the Fujitsu Series in 2009.

“I have won a race and finished on the podium at Queensland Raceway before – however I am under no illusions about how competitive the series is this year, and we would like just a good solid run in the top 10 as part of our run up to Bathurst.”

In other Shannons Supercar Showdown news, the reality TV show will air at a different time this Sunday on 7mate, due to the V8 Supercars telecast. The fourth person to be evicted off the program will be seen at 1:30pm AEST. Check your local guides for details.