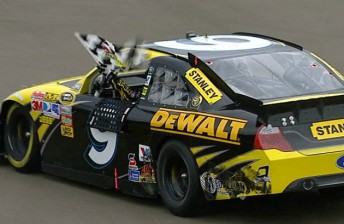 After finishing third, second and third over the past three years, at the same track where fellow Aussie Alan Jones won the US-East Formula 1 Grand Prix at in 1980, the Tasmanian was all smiles at the end of his 105th start in NASCAR’s premier racing series.

In a dramatic ‘green-white-chequered’ finish Ambrose passed Brad Keselowski on what was the second last lap, before a massive accident involving David Ragan and David Reutimann brought out the final full-course caution flag as the former two-time V8 Supercar champion came to the finish line. 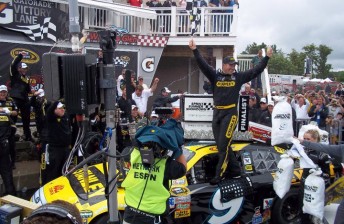 Starting from third, Ambrose used a strategy of speed over conservation as he made an extra stop compared to a number of others around him, including Keselowski and Kyle Busch .

His chances nearly ended on lap #65 of 90 when Denny Hamlin lost his front brakes and just avoided hitting the Tasmanian before slamming into the fence.

Ambrose led the race at different points, each time giving up the front position to come to the pits.

Crew Chief Todd Parrott kept his Richard Petty Motorsports driver in-check throughout the entire race, as they stuck to their game plan and it paid off.

“I have sacrificed so much and to finally be here in victory lane in the Cup Series is a dream come true,” said Ambrose. 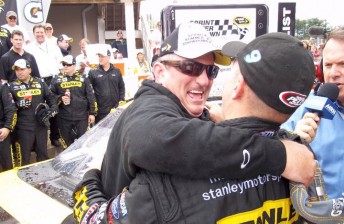 “Mrs Petty is not doing so well at the moment and this win is for her and the whole Petty family. To Richard and everyone else who gave me the chance – thanks very much.

“No one realises how much everyone puts in to get to victory lane and when it happens it’s such a surreal moment.”

The victory gives Ambrose a chance at making the Sprint Cup Chase thanks to the wildcard entry for the two drivers with the most wins from 10th to 20th. Although this will require at least one more race win his crew chief was left with no doubt that he has one of the best drivers in Sprint Cup racing.

“That is awesome,” said Parrott.

“To give that guy his first win – it’s a tribute to the whole organisation. We had a great race car and one heck of a race car driver. I am so proud of him”

Ambrose is 22nd in the championship, but just a single point from the all-important 20th position.

The victory not only qualified Ambrose for the million dollar bonus in the Sprint Summer Showdown, but also as a starter in the 2012 Sprint All-Star Race.