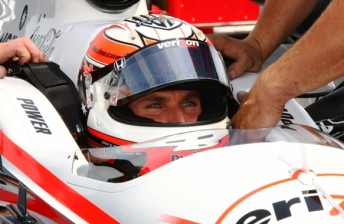 Australia’s Will Power has blasted IndyCar’s top official for re-starting the MoveThatBlock.com Indy 225 at Loudon in New Hampshire during a late rain period which saw him crash.

Ryan Hunter-Reay was awarded the race victory after the red flag following the final race accident and rain.

In a repeat of the famous Bathurst 1000 result of 1992, the final results were taken from the last completed lap which placed Power in fifth behind Oriol Servia, with Scott Dixon in third and James Hinchliffe fourth.

“I was begging him not to go green – it’s too slippery” said Power.

“From what Tim Cindric (President of Team Penske) has said so was everyone else.

“He (Brian Barnhart) makes such bad calls all the time. This has got to be it. They can’t have this guy running the show because that was a decision that put a lot of drivers in danger. It was no condition to race in – shame on him.”

Barnhart was left to explain the reasons behind the decision to re-start the race. 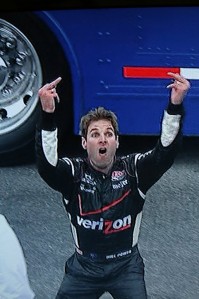 “Based on the information we had, where we get reports back from our observers and track safety people, they said there was not a surface change and it was a raceable condition,” said Barnhart.

“Obviously the attempted re-start showed that wasn’t the case. So it was a mistake on race control’s part and the only right thing to do, and the fair thing to do, was go back to the running order prior to that re-start.”

“We didn’t have a single pit tech call and say we couldn’t go,” said Barnhart.

Power was running fifth heading to the re-start with nine laps remaining when Danica Patrick lost traction and the Australian spun trying to avoid the incident.

A clearly agitated Power jumped from the car and ran towards officials before being led away by Cindric.

In a race which had plenty of ups and downs for Power, he appeared to have been given a ‘free-kick’ from IndyCar rival Dario Franchitti after the Scotsman crashed out after dominating the opening 65 laps of the race.

However, a rain shower turned the race on its head and after the resumption Tony Kanaan also ended upside down after contact with Tomas Scheckter and Marco Andretti.

On the following re-start Franchitti on the pole locked wheels with Takuma Sato and slammed into the pit straight wall.

Through all the chaos Power, who had dropped off the lead lap earlier, put himself back in the mix with an off-sequence pit stop.

The Toowoomba native led the race at three-quarter distance, although his priory was more about a strong finish and bridge the points’ gap to Franchitti.

He fell back to sixth after his last stop and improved to fifth after 86 laps of green flag racing, and then the rain came again with 20 laps remaining.

Although the race officially ran another 10 laps, the positions remained the same.

Even after the announcement of the final results, a number of teams were still disputing the decision.