Matt Lovell scored both of Sunday’s race wins during the fourth round of the Australian Saloon Car Series at Morgan Park.

In his Batteries Direct Ford Falcon AU, the South Australian came out on top of both of the races to extend is advantage in the series to 155 points over Shawn Jamieson (who didn’t contest the round).

In Sunday’s first race, Lovell had to overcome challenges from all corners, including Coleby Cowham, Lindsey Kearns and Tony Evangelou. At times there were as many as seven cars vying for a shot of victory while many other dices occurred down the field in what would have to have been the Saloon Car race of the season.

The race came under a safety car when David Rogers went off at high speed and careered backward into a barrier at turn four. The race also finished a lap short as a couple of sheep had managed to find their way onto the track.

In the second and final race on Sunday, Evangelou passed Cowhan three laps into the last, the race for victory was on in earnest between him and Lovell. Evangelou tried everything to get past. He managed to range alongside the leading Ford several times but to no avail as Lovell held on for the victory.

There was a group of four striving to gain third spot but Cowham held out fellow Falcon runners Bevan Garioch, Chris Berry, Tony Shanks and Kearns who had come from the back to head Harley Phelan, Jonathon Fishburn’s older EA Falcon and Geoff Brown (Falcon) who remains third in the series.

The next round of the Australian Saloon Car Series will be held at Sandown on September 9-11. 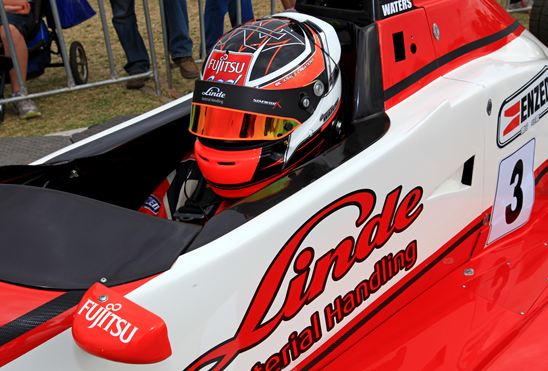