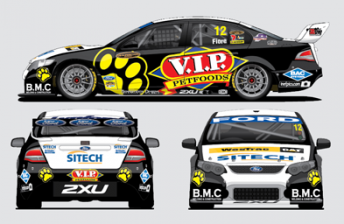 Dean Fiore will campaign his Triple F Racing Falcon at Queensland Raceway this weekend with support from VIP Petfoods.

Fiore recently ran a unique sponsorship venture where a collection of his in-house sponsors and investors paid a set fee to enter a ‘naming-rights’ competition, with the winner to receive signage on the doors of his Falcon for the remaining rounds of this year’s V8 Championship.

Close friend, sponsor and stunt car rider Robbie Bolger was the winner of the lucrative competition, but with no ‘brand’ of his own to promote, Bolger called his mate Tony Quinn, founder of VIP Petfoods.

Bolger and Quinn have struck a deal that will see the popular VIP Petfoods brand be seen on the doors of Fiore’s car at the Queensland Raceway event.

“Robbie has been helping me out on and off over the years,” Fiore told Speedcafe.com.

“He’s a mate of mine, and I ran the competition idea by him and was more than happy to help out.

“The thing with Robbie is that he doesn’t have a brand to use on the doors of my car. Robbie is good mates with Tony Quinn, so they spoke, and they have done a deal for VIP Petfoods to run on the side of the car.”

The deal means that there will be two VIP Petfoods-backed cars in the field – the other being driven by Paul Morris Motorsport’s Steve Owen.

After racing for most of the season with one-off sponsors on doors of his Falcon, Fiore was mildly frustrated that his winner does not have a brand of his own to promote.

“The whole reason we ran this was so that we could have a consistent look to our car,” Fiore said.

“It’s frustrating in some ways that we still don’t have that, but I’m not too fussed by the whole deal. At the end of the day, Robbie owns the rights to the sides of the cars, so he can do whatever he wants with them.”

Fiore’s VIP Petfoods-backed Falcon will be seen at Queensland Raceway this weekend for the Coates Hire 300. 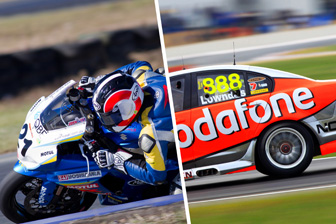