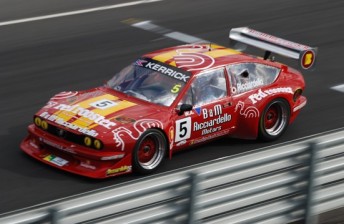 Tony Ricciardello has wrapped up another Kerrick Sports Sedan Series crown after a dominant display at Morgan Park.

The six-time champion dominated qualifying in the opening session by such a margin that he didn’t bother with session two.

Scott Butler qualified second but suffered a drive-shaft failure in qualifying. He was forced to arrange a return trip to Menai, NSW, overnight to find a replacement. Butler eventually finished just one of the three races with a fourth place in Race 1.

S2 class stalwart Damian Johnson was out too in his iconic LC Torana. An oil pressure issue in the number one cylinder ultimately forcing a hole in the block and an early trip home.