Donny Schatz charged from 13th position to win his fifth Goodyear Knoxville Nationals, however everyone was left talking about the performance by diminutive Oklahoma native, Shane Stewart, who charged to second placing.

Schatz had to overcome 12 times Knoxville Champion, Steve Kinser and a charge from Sammy Swindell to take victory for Tony Stewart Racing.

Australian favourite, Daryn Pittman was looking good for a charge at the lead before he slapped the wall, putting an end to his charge and allowing Swindell through.

Schatz made short work of those in front of him and got to the front early. He wasn’t headed from there.

Australian hopes rested on Kerry Madsen – the only Aussie to make the feature. He flipped in turn two early in the feature which put his Keneric Racing machine out of the 50 lap encounter.

He wasn’t alone – Austin McCarl (son of Knoxville legend Terry McCarl) had a hard flip and tore his machine up – causing plenty of work for Australian crew chief, Steve Fitzpatrick.

The man who is challenging Schatz’s mantle as the best sprintcar driver in the world – Jason Meyers – had a bad night, pulling in midway through the feature race.

Brooke Tatnell was unlucky not to make the A-Main – after spinning, he crashed out of the B-Main. Ian Madsen was eliminated in the last chance qualifier as well, snapping an axle.

Lynton Jeffrey was unlucky not to make it through to the feature race, finishing fifth in the B-Main, when just four transfer.

Bruce White put in a solid performance, winning the E-Main and finishing 16th in the star-studded D-Main. Marty Perovich chose not to greet the starter.

The win by Schatz cements his position as undisputably the best sprintcar driver in the world right now and continues a legacy that only Knoxville can produce. The question is – how many more can he win? 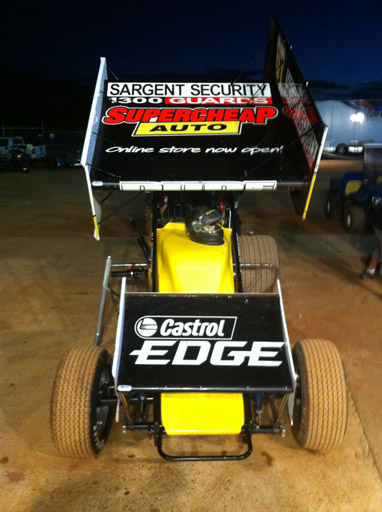