Franchitti on pole at Loudon 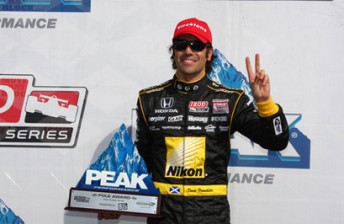 Franchitti to start up-front at Loudon

Dario Franchitti will start from pole position at the New Hampshire Motor Speedway in Loudon while Australia’s Will Power has some work to do setting the 13th fastest time.

The return of the IZOD IndyCar Series to Loudon for the MoveThatBlock.com Indy 225 caused plenty of head scratching with Franchitti describing the track as similar to the Milwaukee Mile; a circuit he set pole time and won at earlier in the year.

The 20th qualifier, Franchitti recorded a two-lap combined time of 43.1976 seconds and an average speed of 170.843 mph to secure his second PEAK Performance Pole Award of the season. His second lap (21.5968 seconds) was a one-lap IZOD IndyCar Series track record. The series last raced at the speedway in 1998, when it was even closer to Milwaukee’s configuration.

It was Franchitti’s 26th Indy car pole, overtaking Paul Tracy for ninth on the all-time list.

“The run itself, it was the first time I’ve been wide open at both ends,” said Franchitti.

“On that first lap you go into Turn 1 wide open wondering if it’s going to stick or not. If it doesn’t stick it’s going to get ugly quickly.

“The whole Target team did a great job coming up with the set-ups and working through the problems this morning with a slick track. (Engineer) Chris (Simmons) and I bounced some ideas back and forth and (the pole run) was the result.”

Four different teams are represented in the top five.

Oriol Servia, driving the No. 2 Telemundo car for Newman/Haas Racing, will start a season-high second (169.831 mph average). Tony Kanaan tied his season high in the No. 82 GEICO-KV Racing Technology-Lotus car and will start on the inside of Row 2 next to rookie James Hinchcliffe in the No. 06 Sprott Newman/Haas Racing car, who also posted a season best.

Will Power, who is 63 points behind the front-running Franchitti in the series championship with the six races remaining, will start on the seventh row in the No. 12 Verizon Team Penske car.