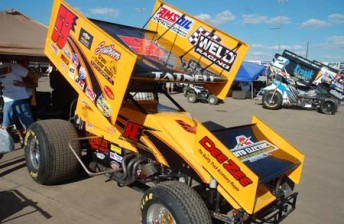 Brooke Tatnell has finished seventh in the second qualifying night A-Main at the Goodyear Knoxville Nationals, whilst Kerry Madsen transferred through the B-Main to finish 11th.

Madsen’s younger brother, Ian put in an exceptional showing to finish mid-pack in the A-Main – greeting the chequer in 15th.

Knoxville regular racer, Mark Dobmeier won the qualifying night from World of Outlaws points leader, Jason Meyers and Brian Brown. He put on a stunning display to charge into the lead of the race and once there, was never headed.

Kerry Madsen – in the Keneric Racing machine – was the best of the Aussies in time-trials, qualifying seventh fastest behind Kasey Kahne Racing sensation, Cody Darrah – who set the mark with a 15.153 second lap.

Tatnell was 25th quickest in qualifying – he and Ian Madsen split in the time sheets by Knoxville legend, Danny ‘The Dude’ Lasoski.

Sydney’s Marty Perovich – a late inclusion into the field, time-trialled in 46th position.

Both Tatnell and the younger Madsen secured direct berths in the A-Main by virtue of their fourth (heat four) and third (heat two) placed heat race finishes respectively.

The Senior Madsen had to do things the hard way through the B-Main. He encountered trouble in heat two (up against his brother) with a front wing giving way and hampering his progress. 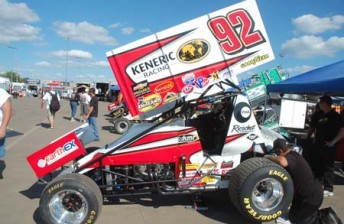 Kerry Madsen had a strong showing despite a problem in his heat (Credit: Hoseheads.com)

In the B-Main, he had no such troubles, transferring with the third placing. The low finish in his heat will, however, compromise his points position heading into the remainder of the event.

Perovich was knocked out of contention in the C-Main. He finished ninth in the first heat of the night and finished in the same position in the C.

Thus far, the Australians are in a good position overall and with luck –we could have up to four in Saturday night’s A-Main.

Tomorrow, the Knoxville Nationals continues with the World Challenge being the feature event. It is a race Australians traditionally have done well at

Next Story Madsen to start 15th in Nationals Final 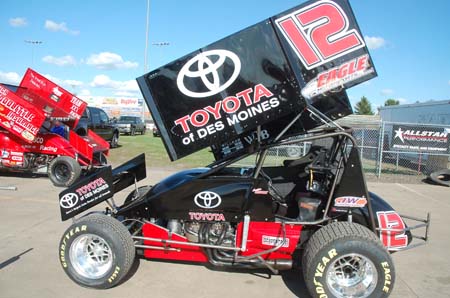