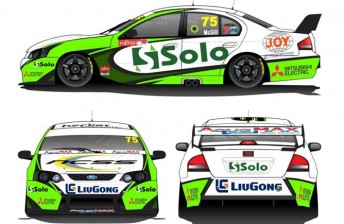 According to McGill, the long-term deal with the Australian owned firm is a significant reward for his small team’s persistence in the series.

“At this level, this sport just keeps getting harder every day, we’ve been without a naming rights sponsor since 2007,” said McGill.

“My small team has struggled through the Global Financial Crisis, we’ve seen countless teams come and go but once again, Solo, along with the support of our other great sponsors NCSS, Joy Mining, Liugong and Aquamax prove that if you hang tough, work harder than the next guy and believe in your product, you can achieve great things for many people.”

McGill has made a category record 45 event starts in the Fujitsu Series since debuting in 2001, taking a best race finish of second at Wakefield Park in 2005.

The series continues as a support to the Coates Hire Ipswich 300 at Queensland Raceway on August 19-21.