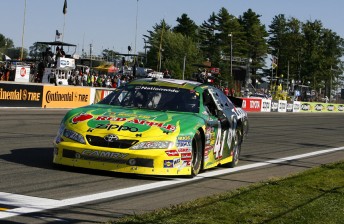 Marcos Ambrose’s bid for a fourth straight NASCAR Nationwide Series victory at Watkins Glen is over just days before the race.

Ambrose’s Richard Petty Motorsports team has withdrawn its entry for the event, which Ambrose has won in 2008 (STP Ford), 2009 (Armor All Toyota) and 2010 (Zippo Toyota) for previous car owners Tad and Jodi Geschickter.

Speedcafe.com understands that lack of sponsorship was the major factor in the decision to withdraw the entry, which was to be Ambrose’s first Nationwide Series start for 2011.

The Australian will however race in the second tier Nationwide Series the week after at the Circuit Gilles Villeneuve in Montreal, Canada aboard a Ford Mustang backed by his Sprint Cup Series sponsor Stanley and fielded by his RPM team.

Fellow Tasmanian Owen Kelly will drive the car in practice and qualifying for Ambrose in Canada while Ambrose completes Sprint Cup commitments at Michigan International Speedway.

It leaves Ambrose free this weekend to concentrate solely on breaking through for his maiden victory in the premier Sprint Cup Series.

Ambrose is one of the favourites for this weekend’s Cup race at Watkins Glen, with three straight Nationwide Series victories at The Glen and finishes of third, second and third at Sprint Cup level at the New York state road course.