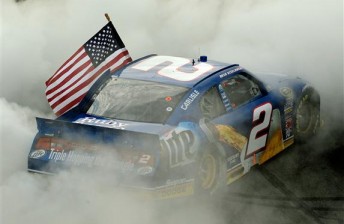 A broken ankle could not stop Brad Keselowski at Pocono

Brad Keselowski has put a broken ankle behind him to win the NASCAR Sprint Cup Good Sam RV Insurance 500 at Pocono Raceway.

The driver of the #22 Dodge suffered foot, ankle and back injuries in a high-speed testing crash at the Road Atlanta road course last Wednesday. CLICK HERE for that story.

Prior to the race weekend at Pocono he had to be cleared by NASCAR’s medical staff and the injuries prevented him from competing in the Nationwide Series race at Iowa.

In a race that weather played its part, Keselowski and the other drivers had to wait-out a 90-minute rain shower in the middle of the 200-lap journey. A gamble on not stopping prior to the re-start vaulted Keselowski and Penske team-mate Kurt Busch to the head of the pack. Through the final two pit stops in the race they were able to maintain their spots near the front, with Keselowski taking his second win on the year while Busch finished third behind his brother Kyle.

Kurt Busch held off a fast finishing Jimmie Johnson with the pair ‘trading paint’ on the final lap. A heated exchange followed on the pit road between the two NASCAR stars.

No such issues for Keselowski who is now the top-seed in the ‘wild card’ segment for the Sprint Cup Chase. The ‘wild card’ is reserved for the two drivers sitting between 11th and 20th who have the most wins on the season.

“It’s not me it’s good people it really is,” said Keselowski.

“I just want to get this car in the chase and have a good run for the championship.

“Runs like today show that we can do it. Everyone on this team is working together and turned around Penske Racing; it’s something I’m really proud of and I’m looking forward to many years of success here.

A 20th place finish for Australia’s Marcos Ambrose was not the result he was looking for.

The Tasmanian struggled to find a car balance and even bounced off the wall at one stage.

“It was just a long day today, but we just fought and gouged all day,” said Ambrose.

“I feel like I got the most out of myself and the guys really tried hard. It’s not the day we wanted, but we’re still proud of ourselves and we’ll get ‘em next week.”

Ambrose has every right to feel confident as next week is the second and final road course race of the year at the famed Watkins Glen International. He will race on the Saturday Nationwide Series race, an event he has won for the last three years. The Ford driver will then be one of the favourites for Sunday’s Sprint Cup race after finishes of third, second and third.