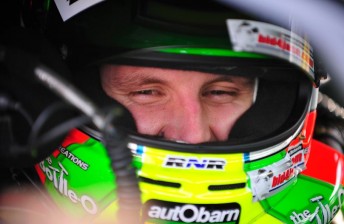 Paul Dumbrell has confirmed that he will not be continuing as a full-time driver beyond the 2011 season.

The 28-year-old will end his three-year agreement to drive the #55 The Bottle-O Ford Performace Racing Falcon a season early.

Dumbrell currently juggles his V8 Supercars duties between working as the CEO of Autobarn, competing in iron man events and co-hosting the V8 Nation radio program.

Stints with PWR and Walkinshaw Racing followed, before linking with FPR for the 2010 season yielded the Victorian his first race win at Sandown.

“The last two seasons at FPR have been great and easily the most successful time I’ve ever had and I am incredibly grateful for that, but it is sad to hang up my helmet from a full time perspective and move onto the next stage of my life at the ripe old age of 28,” said Dumbrell.

“Together with Rod I enjoyed our first podium, race win and pole position so it has been great to do that with such a great friend.

“Our association with FPR over the last two years has really paid off and I wish he and the team all the very best for the future.”

The Bottle-O Racing principal Rod Nash says he will announce a replacement for Dumbrell in due course.

“Paul and I have been going racing together since he was a teenager so we have enjoyed a long association and in recent times, a successful one,” said Nash.

“We are in this sport to stand on the podium and it was great to achieve that with Paul given the long association between our respective families.

“However, I can now work with FPR to build on the foundation we have established across the last two seasons and I look forward to announcing the identity of our new driver in the near future.”

While Nash says he is keen to retain Dumbrell’s services for next year’s endurance races, the 259 start veteran has been linked to a drive with TeamVodafone.