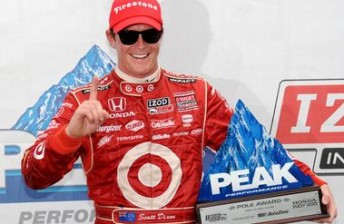 The two-time IndyCar Series champion set an early best of 1:08.08s in the final six session that would not be beaten.

Ryan Hunter-Reay and Graham Rahal ensured there was two Americans in the final session, while James Hinchcliffe, Alex Tagliani, Takuma Sato, and Charlie Kimball rounded out the top 10.

Frenchman Simon Pagenaud was 18th fastest in the 27 car field, substituting for an injured Justin Wilson in the Dreyer and Reindbold entry.

Wilson had run wide and crashed at Turn 13 in the final practice session, fracturing his spine.

With Wilson being flown to Indianapolis for further attention, Pagenaud said it was a rush to make it out for qualifying.

“I was watching practice in the infield and for the first time I didn’t bring my gear, maybe because I don’t have an insane mind thinking that someone could get hurt,” said the former Team Australia driver.

“Thank you very much to a lot of the drivers in the IndyCar paddock for helping me and lending me their stuff to use.”

Next Story Smash 'n grab for Stenhouse Jr. at Iowa