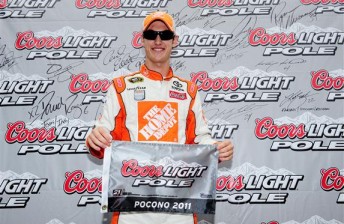 Joey Logano on pole at Pocono

After posting a lap at 172.055 mph (52.309 seconds) during the qualifying session, Logano had to wait for 20 fellow Sprint Cup drivers to make their runs before he could claim the top spot for the race at the 2.5-mile triangular track.

A patch of sunlight, which broke through the clouds after Logano made his attempt, may have warmed the track enough to prevent those who followed him from beating his time.

Logano didn’t show his hand in Friday’s practice, when the qualifying order is set — slowest to fastest — according to practice speeds.

“About all of us looked at the schedule before we got here and saw that qualifying was in the morning,” Logano said. “There’s a lot of cars sandbagging [in practice]. A lot of guys were definitely shutting it down before they got to the start/finish line. The chance you take is, if it rains, you’re SOL.”

In the event of a rainout, NASCAR sets the starting order for the race according to practice speeds.

“I don’t know where we were on the chart — 20th or so on the speed charts in practice? Obviously, we had a lot more than that,” Logano said.

Australia’s Marcos Ambrose will have some work to do starting in 27th.

“That’s not what we wanted,” said Ambrose.

“When you’ve only got one lap it’s hard to really know what you’ve got out there.

“I tried, but I just got a little loose off of one and lost a lot of momentum.”

Next Story Smash 'n grab for Stenhouse Jr. at Iowa