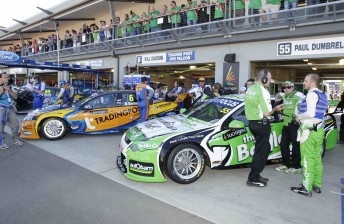 The three FPR cars in the Townsville pit lane

Paul Dumbrell will remain in his current Ford Performance Racing-built chassis for the remaining 2011 V8 events, despite two brand-new cars set to debut from the factory Ford stable.

Dumbrell, driver of the #55 The Bottle O Racing Falcon FG, will keep his existing chassis while his team-mates Will Davison and Mark Winterbottom step into their new rigs in the coming events.

At Queensland Raceway in two weeks time, Davison will get the first of FPR’s new cars – the FPR-1010 – before Winterbottom gets his hands on his new car for the first of the endurances races at Phillip Island in September. Winterbottom will share it with Steven Richards.

While Dumbrell is concerned that the first half of the 2011 season has not delivered the results that were promised with the team’s strong finish to 2010, he says that putting him in a new car is no way to fix their problems.

“I’ve actually got the second newest car in the fleet anyway, so I’m not fussed by it. I couldn’t see any advantage switching,” he said.

“We’re not pointing the figure at the car for reasons why we haven’t followed on with our speed from last year.

“The last few rounds for us has been about getting our heads around soft tyres, and our tyre life in general. That’s the biggest thing we’ve lost since last year, and we’ve made some significant in roads, but we’re still a long way from being where we want to.”

Dumbrell insists he has no issues with remaining in his current machine.

“I haven’t got an issue with staying in my car,” he said.

“Frosty (Mark Winterbottom) and I have the same model anyway, Will’s car is the model before, but obviously they all have up to date modifications on them.

“I don’t think today’s new cars give you a five or 10 percent gain. Yes, things are lighter, more rigid, but the shocks, springs, set-up is the fundamental difference between getting it right or wrong.”

The next V8 Supercars Championship event will be held at Queensland Raceway on August 19-21.