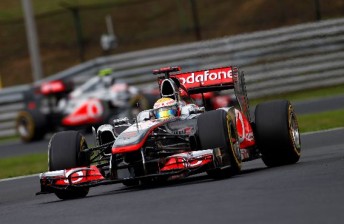 CLICK HERE for the full race report, results and points from the Hungaroring

Having pressured pole-sitter Sebastian Vettel into a mistake just four laps into the race, Hamilton led for much of the afternoon before spinning during a brief shower.

The Briton’s day was soon made worse by a premature move to slick tyres and a drive-through penalty for impeding Paul di Resta’s Force India when rejoining from the spin.

“I made a big mistake,” said Hamilton of his Lap 47 rotation.

“My left front tyre was pretty worn so I went a bit wide at the chicane and spun, which is very, very rare.

“Then after that I honestly have to apologise to Paul di Resta. I didn’t see him – I had absolutely no clue.

“I don’t know what happened but I got a penalty for something, which is to be expected, I guess, sometimes. So I apologise to him.”

Hamilton had continued from the spin in second place, and re-took the lead from team-mate Jenson Button before pitting for intermediate tyres on Lap 52.

While Button stayed with his slick tyres and cruised to victory, Hamilton spent just two laps on the inters before returning to the pitlane.

“We were having radio issues,” said Hamilton of the decision process.

“I think there was perhaps one point when they got some information from me but maybe it was a little bit of info.

“I heard them say it was going to rain and it was already spitting, so we opted to go for the wet tyres. I think they called me in and I did the lap.

“Anyway the tyres went off and it wasn’t necessarily the best call, but that’s motor racing.”

Having also won during a wet-dry Canadian Grand Prix, Button enters the second phase of the season equal with his team-mate for race wins, and just 12 points adrift in the championship standings.

“For some reason I like these conditions, don’t ask me my why, but it worked out again,” said Button of his Hungarian Grand Prix.

“I want to say a big thank you to the team. Everyone has worked so hard to produce the car we have now.

“I think we are going into the break on a nice high. Every day we are on holiday we’ll be thinking about Spa.” 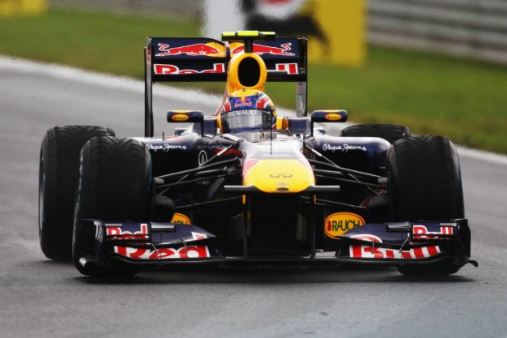