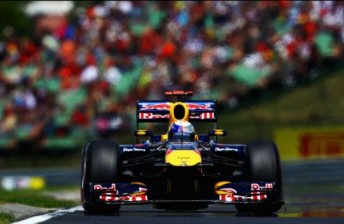 Sebastian Vettel has snatched pole position from Lewis Hamilton at the Hungaroring.

Hamilton will start second despite failing to improve on his second Q3 run, ahead of team-mate Jenson Button and the Ferrari of Felipe Massa.

Like Hamilton, Fernando Alonso could not improve on his initial Q3 effort and will start fifth, one place ahead of Mark Webber, who suffered KERS issues in the session.

Nico Rosberg, Adrian Sutil, Michael Schumacher and Sergio Perez rounded out the top 10, having completed just one Q3 run each.

Australian Daniel Ricciardo will start his third Grand Prix from 22nd on the grid. The Hispania driver was 0.16s adrift of team-mate Tonio Liuzzi in Q1, but quick enough to beat Virgin Racing’s Jerome D’Ambrosio.

Toro Rosso’s Sebastien Buemi finished the session 18th fastest but will start 23rd thanks to a five place grid penalty for his collision with Nick Heidfeld in the German Grand Prix.