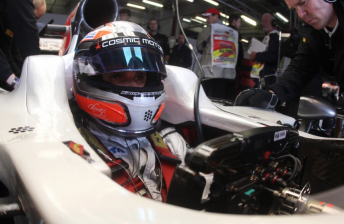 Tonio Liuzzi in his Hispania Formula One car

Liuzzi, who will make his V8 Supercars debut with Tony D’Alberto in the #3 Wilson Security Racing Falcon FG in the Armor All Gold Coast 600 in October, has met with D’Alberto’s chief engineer Adam de Borre in Germany to analyse V8 data and watch on board footage from inside a V8.

De Borre says that his in-depth pre-brief will put Liuzzi on the front foot ahead of the Italian’s V8 debut.

“It was good to get to spend some time with Tonio,” de Borre told Speedcafe.com from Europe.

“I feel he will do a very good job for us, not only in the car but out of the car as well. He is a total professional.

“We covered a basic understanding of the car – layout and tuning abilities. “We went through some data of which he had a very good grasp of engineering a car, understanding damper movement and relating that to what the car does.

“We then went through some vision and covered key points like starts, pit lane speed limiter and driver ergonomics.

“All in all it was a good to be able to tick these boxes well in advance of the race meeting. When he gets here for the test at Queensland Raceway before the event, he’ll hit the ground running.”

Liuzzi, driver for Hispania Racing, will become the first active Formula One driver to compete in V8 Supercars during the October 21-23 event.

CLICK HERE for more during yesterday’s launch of the Armor All Gold Coast 600.

While Liuzzi has a head start to his V8 Supercars debut, he has a Grand Prix to focus on this weekend in Hungary. For the inside line on the Hungarian GP, see Speedcafe.com’s F1 Race Guide below.