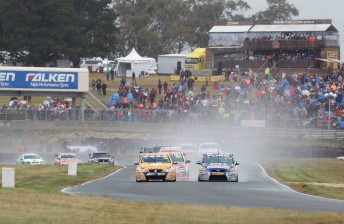 The start of Sunday's race at Symmons Plains last year

V8 Supercars may have the opportunity to remain in Tasmania beyond this year with a new two-year deal on the table.

At this point, the V8 Supercars Championship will head to Symmons Plains for the final time this November after the original three-year deal (ending 2013) was cancelled when the state government withdrew its funding.

That original $1.7 million deal was signed by former Labor government premier David Barlett, who were replaced earlier this year by Lara Giddings.

Speedcafe.com spoke to a V8 Supercars representative, who confirmed that Cochrane and Howard met with the Tasmanian government and that the potential for a new deal is real, although a decision is not expected to be made in the very near future.

The V8 Supercars will head to Symmons Plains on November 11-13 for the Falken Tasmania Challenge.