Former Formula One drivers Mika Salo and Christian Klien say they are excited to be heading to the Armor All Gold Coast 600 with Ford Performance Racing.

Event organisers confirmed today that the Finn and the Austrian will team up with Will Davison and Paul Dumbrell respectively for the international co-driver event.

Australian IndyCar star Will Power had previously been confirmed to race alongside Mark Winterbottom in the team’s Orrcon Steel backed entry.

Salo competed on the Gold Coast last year alongside Andrew Thompson at Walkinshaw Racing, failing to finish either of the 300km races.

According to the 44-year-old, the 2011 event will be boosted by the increased number of international drivers.

“Last year was my first time driving a V8 Supercar and the car was challenging to drive, but also a lot of fun,” said Salo.

“This year’s race will be more interesting as every team will have an international driver so there will be a lot of people racing the cars for the first time.

”FPR builds a quick car and I look forward to driving for Ford’s official team. Over the years I have driven for many works outfits and their preparation and commitment is always very high.” 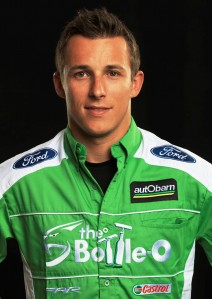 The 28-year-old enjoyed a 49 race career in Formula One with Jaguar, Red Bull and Hispania, and is looking forward to his first taste of V8 Supercars.

“Racing in Australia is always a special event for me, having completed my maiden Formula 1 race there,” said Klien.

“My friends over there have told me that the Gold Coast 600 event is the highlight of the season, and I feel very proud to have been invited to take part. I simply cannot wait to get behind the wheel.”

FPR Team Principal believes the pair will be a good fit for the Ford factory team.

“I know Mika well from my time in Formula 1 and Christian is already part of the Prodrive family, so both will fit right into our team which will be crucial given they only have a day to adapt to the car,” said Edwards.

“When you add in Will Power to the mix all three of our cars have very strong driver line-ups so we are aiming to add a few more surf board trophies to our cabinet come October.”