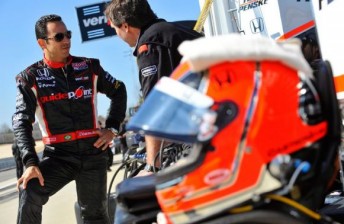 Stone Brothers Racing has confirmed that Helio Castroneves will return to the Armor All Gold Coast 600 this year alongside Tim Slade.

Having taken the win in the United States version of the popular Dancing with the Stars reality television franchise in 2007, Castroneves is arguably the most high profile personality set to race on the Gold Coast this year.

The three-time Indianapolis 500 winner grabbed the early attention in last year’s event when he became the first international to crash in opening practice.

Queensland Minister for Sport, Phil Reeves, said the IndyCar star’s eagerness to return for a second year is a credit to V8 Supercars and the Gold Coast 600 event.

“To have Stone Brothers Racing announce a second former Indy 500 winner for their team is a great coup for them and the event,” said Reeves of the Castroneves/Slade, Dixon/Shane van Gisbergen partnerships.

“Helio is a tremendously popular driver throughout the world and I am sure there will be many fans back in Brazil keeping an eye on him during the Armor All Gold Coast 600 weekend.

“Helio is one of several drivers making a return visit this year and I think that is a testimony to the V8 Supercar category and the event, in which the Bligh Government is a big believer.”