Coulthard made to wait on contract extension 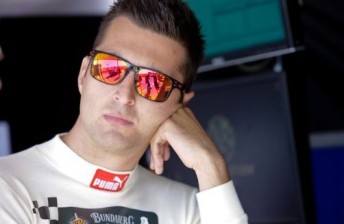 Fabian Coulthard is in the box seat to retain his drive at Walkinshaw Racing next year, but team officials have said that no decision will be made for some time.

Coulthard, driver of the #61 Bundaberg Racing Commodore VE, is in the final year of his two-year drive deal with Walkinshaw Racing – a team that in the past month has gone through some significant management overhauls.

Racing Operations manager Mike Henry says that Coulthard’s improved form this year has put him in a great position to retain his seat, but warned that securing a deal won’t happen in the near future.

“I want him to stay on board for next year,” Henry told Speedafe.com.

“In the most respectful way to all our drivers, currently our job is about working through the logistics, needs and requirements to ensure the efficiency and progress of our team. That’s what we’re all focussed on now.

“At this point, I haven’t addressed it directly. I’m only too happy for him to stay. I hope he wants to stay, and we’ll obviously talk about that in due course.

“But at this point, there’s no decision, because we haven’t even gone down that path just yet.

“Since we’ve had the major changes we’ve had here, we’ve had two race meetings, and as you’ll completely understand, we’ll work through our situation in the next couple of months to get a better idea of next year.”

Henry was highly complimentary of Coulthard’s results and work ethic this year.

“Fabian has been great this year. I can’t speak highly enough of Fab’s position in our team,” Henry said.

“He’s working hard, he is training, he’s focusing on the job, he’s working better with his engineers, he’s had a longer time with the team to settle in and has become a valuable member of the organisation.

“Ultimately, it has been a good fit for all of us. It’s been an improvement on every front.”

The next round of the V8 Supercars Championship will be held on August 19-21 at Queensland Raceway. Next Story Oliver Gavin to partner Greg Murphy for GC600