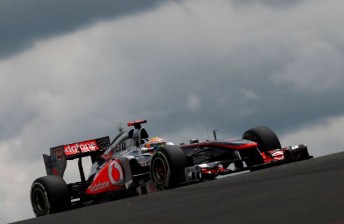 All three drivers took turns at leading the race in a dramatic opening 30 laps before the 2008 World Champion asserted his dominance in the third stint.

Alonso ended the race second, ahead of Webber, while Sebastian Vettel overtook Felipe Massa for fourth when the pair pitted for the prime tyre with one lap remaining.

At the start it was Hamilton who got the jump from second on the grid – with Webber left to tuck in behind the McLaren after searching first inside and then out on the way into Turn 1.

Alonso meanwhile lit up his right-front tyre as he took third from Vettel, while deeper in the pack Heidfeld slid into Paul di Resta at Turn 3 – sending the Scot spinning back to last.

Vettel retook third from Alonso when the Spaniard ran wide at the exit of Turn 2 on Lap 2, before the duo once again traded places five laps later thanks to a Turn 1 lunge from the Ferrari driver.

Vettel’s race soon took another turn for the worse, with the reigning World Champion spinning wildly at Turn 10 after dipping his right-side tyres onto the sodden astroturf on entry. The German lost eight seconds in the incident, rejoining narrowly ahead of Rosberg’s Mercedes.

Having made it around Rosberg in the opening stint, the first round of pitstops saw Massa leapfrog Vettel – initiating a race-long scrap between the Ferrari and Red Bull drivers.

Hamilton, Webber and Alonso ran nose-to-tail towards the end of the first stint, with Webber eventually to snatching the lead thanks to pitting two laps before his rivals.

Try as he might, the Australian failed to pull away in the second stint however, and by Lap 30 the Red Bull was again the first to take new tyres. Hamilton pitted a lap later and emerged infront of Webber – fending off an outside attack at Turn 2 to hold the lead.

Ferrari appeared to have trumped the squabbling pair when they returned Alonso to the track at the head of the field on Lap 32, before Hamilton immediately pulled off the outside pass on Alonso that Webber had attempted on the McLaren a lap earlier.

The leading trio subsequently spread out in the third stint as the teams contemplated the ideal time to switch to the slower medium compound Pirelli tyres. Hamilton took his with eight laps to go, and while Alonso and Webber held out longer on their aging soft tyres, the previous order was restored by the flag.

Vettel snatched fourth from Massa when the pair pitted together on the penultimate lap – a stuck rattle gun blamed for a sluggish Ferrari stop.

By contrast to the late scramble at the front, Sutil eased home on a two-stop strategy to take his best result of the season in sixth, ahead of the three-stopping Mercedes duo, and the two-stopping Kobayashi and Petrov.

The Russian had spent the opening stint holding off Jenson Button after a poor opening lap from the Brit had dropped him from seventh to 10th.

Button was out of the race by Lap 36, suffering a hydraulics failure immediately after taking fifth from Rosberg.

Also on the retirements list was Heidfeld, who tripped over Sebastien Buemi’s Toro Rosso into the Turn 12 chicane as the officials issued the German a drive-through penalty for his earlier contact with di Resta.

The Australian beat home Karun Chandhok, whose first competitive outing for Team Lotus had included a hairy slide into the gravel through the Turn 8/9 esses.