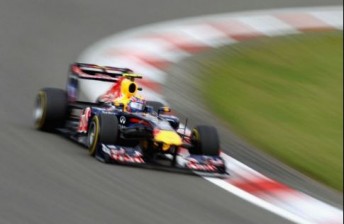 Webber showed the way in practice

Mark Webber has ended Friday practice for the German Grand Prix on top of the time sheets.

The Australian set his best time of 1:31.71s one hour into Practice 2 to edge out morning pace-setter Fernando Alonso by 0.17s.

Nico Rosberg was sixth fastest despite running through the gravel trap at Turn 6 in the afternoon, finishing the session ahead of Lewis Hamilton, Nick Heidfeld, Vitaly Petrov and Adrian Sutil.

It was a difficult day for Daniel Ricciardo – who completed just five laps in Pratice 2 thanks to a mechanical problem after recording a best time almost shy 0.8s of Narrain Karthikeyan (subbing for Tonio Liuzzi in the other Hispania entry) in Practice 1.

Having his first Grand Prix for Team Lotus this weekend, Karun Chandhok struggled to keep pace with team-mate Heikki Kovalainen and finished the day 20th.

See below for the full practice results